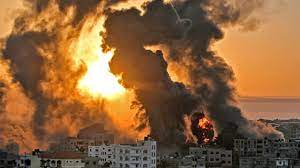 Several commanders of the Hamas militant group have been killed in Israeli airstrikes in the Gaza Strip, Hamas and Israel announced Wednesday, as clashes between the two sides escalate.

Hamas said in a statement that the leader of its military operation in Gaza City, Bassem Issa, and other senior military officials were killed in the attacks.
The Israeli internal security agency said Wednesday that Issa and other top Hamas commanders, including the group’s engineering chief and the heads of cyber warfare and rocket development, were killed. In all, the Israeli government said it killed 16 members of the Hamas military arm in the attacks.

The killings occurred after Israel launched a new round of airstrikes on Gaza early Wednesday, targeting police and security installations. A multi-story residential and office building was heavily damaged. No one was in the building at the time.
Clashes between Palestinians and Israel in the Gaza Strip and Jerusalem have escalated since Monday.
Israeli airstrikes, which Israeli military forces say target militant rocket launch sites, intelligence offices and the homes of Hamas leaders, have killed 65 Palestinians, including 16 children and five women, according to the Health Ministry. At least 365 have been wounded.


Ratcheting up of tensions

Meanwhile, six Israelis were killed in Hamas rocket attacks Tuesday and early Wednesday, including two people in the city of Ashkelon, according to health officials. Hamas has fired hundreds of rockets toward the Israeli city of Tel Aviv and its suburbs since Monday, including a barrage of 130 missiles late Tuesday in response to the destruction of the high-rise building.

The deadly exchange of rocket fire and airstrikes, the biggest fighting between the Palestinian militant group and Israeli forces since the 2014 war in Gaza, were sparked by growing unrest over control of Jerusalem and attempts by Jewish settlers to take over Arab-controlled communities.

The tensions have spilled over into the West Bank, where hundreds of residents in Arab communities staged overnight protests against recent actions of Israeli security forces against Palestinians. A 26-year-old Palestinian was killed Tuesday in clashes with Israeli troops in a refugee camp near the city of Hebron. In the city of Lod, near Tel Aviv, a 25-year-old Arab man was shot and killed by a Jewish resident.


After U.S. Secretary of Defense Lloyd Austin spoke Wednesday with his Israeli counterpart, Benjamin Gantz, the Pentagon released a statement saying Lloyd informed Gantz of the Pentagon’s “ironclad support for Israel’s legitimate right to defend itself and its people.”

The statement said Lloyd “strongly condemned the launching of rockets by Hamas and other terrorists (sic) groups that targeted Israeli civilians” and “reiterated the importance of all involved parties to take steps to restore calm.”
U.S. Secretary of State Antony Blinken similarly condemned the Hamas attacks on Israeli civilians in a conversation with Israeli Prime Minister Benjamin Netanyahu, declaring “Israel has the right to defend itself” while the Palestinians must be afforded the right “to live in safety and security” while calling for de-escalation.
Blinken also said he instructed Hady Amr, the deputy secretary of state for Israel and Palestinian affairs, to leave immediately for the Middle East to urge Israeli and Palestinian officials to de-escalate.

Germany’s Justice Minister, Christine Lambrecht, said Wednesday that Germany is “strongly on the side of Israel” and added it “has the right to defend itself.”


Lambrecht also criticized recent anti-Semitic acts such as Israeli flag-burnings near synagogues in Germany, saying they show “nothing but horrible disrespect for human dignity.”

Erdogan said the global community should “give Israel a strong and deterrent lesson” over its attacks on Palestinians, according to Turkey’s Presidential Communications Directorate.

The Directorate said Erdogan suggested to Putin that the establishment of an international force to protect the Palestinians should be considered.

The U.N. Security Council was holding an emergency closed-door meeting Wednesday to discuss the situation. Sources say the United States is delaying efforts by the Council to issue a formal statement on the escalating fighting out of concerns it could harm behind-the-scenes efforts to end the violence.