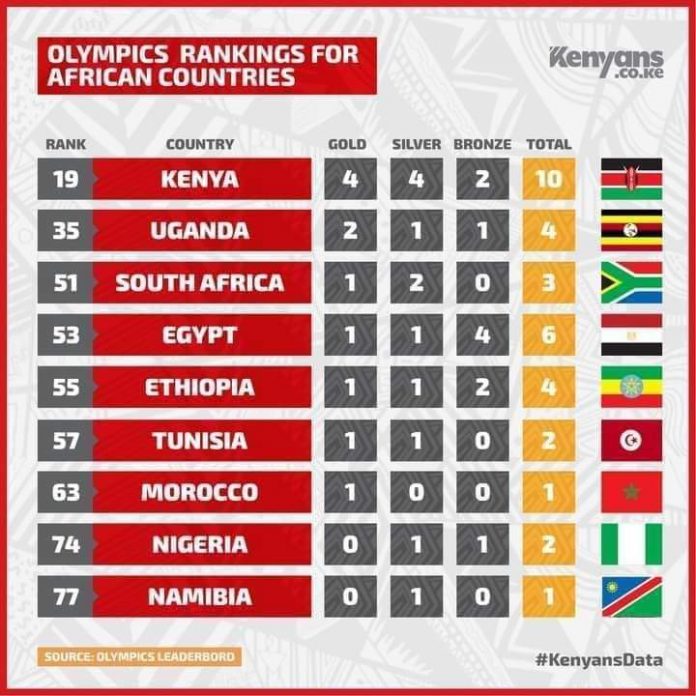 The Tokyo Olympics on Sunday officially come to an end.
During closing ceremonies on Sunday night, IOC President Thomas Bach declared the Games closed. The next Summer Games will be held in Paris in 2024.
Just like competitions during this year’s Games, fans were not present for the closing ceremonies due to the coronavirus pandemic.
Japan concluded the Tokyo 2020 Olympic Games with a record haul of 27 gold medals, far exceeding the previous high of 16 at the 2000 Athens Olympics.


Overall, the United States easily outdistanced all countries in the overall medal count, including gold, silver and bronze medals, with 113 for the U.S., 88 for China, 71 for Russian athletes, 65 for Britain and 58 for host Japan.
Sydney McLaughlin, Dalilah Muhammad, Athing Mu and Allyson Felix maintained U.S. dominance in the event, comfortably winning the gold with a time of 3:16.85.

Kenya was the best African nation and 19th overall, with 10 medals – four gold, four silver and two bronze – all panned from athletics.

The combined Great Britain and Northern Ireland bagged just three silver and as many bronze medals despite their massive sports budget
USA’s count was 26 medals (seven gold, 12 silver and seven bronze) while Italy had five medals, all of them gold and Kenya managed 10 (four gold, four silver and two bronze).

And the ‘TWISTIES’
And when they came, the Games themselves provided plenty of high drama.
In a moment more reminiscent of the Cold War, Belarusian sprinter Krystsina Tsimanouskaya refused to board a flight home after she was taken to the airport against her wishes. She has since sought refugee status in Poland.
U.S. superstar gymnast Simone Biles shocked the world when she pulled out of five of her six events, including abruptly abandoning the women’s team final after attempting just one vault, citing concerns for her mental and physical health, Reuters reported


Her frank admission, combined with earlier comments by Japanese tennis star Naomi Osaka, brought a sharp focus on issues of athletes’ mental health.
In athletics, Italy provided a different kind of shock with their amazing run. Their wins included a stunning gold in the men’s sprint relay, taking their athletics gold tally to five.
In swimming, a United States team without 23-time Olympic gold medallist Michael Phelps still ended the meeting on top of the medals table.


Capping five years of intense preparations for athletes, some of them stretched out on the grass laid down in the stadium. Some appeared to relax as they watched a volley of fireworks light up the Tokyo sky.
In the end, two massive screens stadium projected a retro display that called back to the 1964 Tokyo Olympics: the word “ARIGATO” or “thank you”.

Paris will host the next Games in 2024