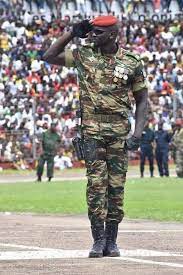 In 2016, Mamady Doumbouya, a commander in the Guinean army, asked his superiors if he could have ammunition to train his troops in marksmanship. He never received it, he said, because they feared he would use the rounds to launch a coup.
Five years on, Doumbouya did just that.
On Sunday, after hours of gunfire in the capital Conakry, the 41-year-old appeared in an online video in army fatigues and wrap-around sunglasses to declare President Alpha Conde ousted and the government dissolved.
“We call on our brothers in arms to unite in order to respond to the legitimate aspirations of the people of Guinea,” he said on state television, Guinea’s flag draped around his shoulders.
Quoting former Ghana president Jerry Rawlings, who seized power twice, Doumbouya said: “If the people are crushed by their elites, it is up to the army to give the people their freedom.”


The power of Guinea’s institutions, its economy, its democracy, must be restored, he said. His words may have appealed to a section of society that has seen none of the wealth from the extraction of the country’s natural resources, and who protested against Conde’s run for a third term in office last year – a move many considered illegal.
Doumbouya’s exact motives are not yet clear – security analysts said he was once a close ally of Conde. The coup has been condemned by the United States, the United Nations and African regional bodies.
He has not outlined a plan to hold democratic elections or establish a transitional government as other coup leaders have done in West and Central Africa in recent months. On Monday, he barred government officials from travelling and threatened those who did not attend a meeting he summoned them to.

“I ASKED FOR AMMUNITION”

However, a speech given in 2017 to a conference hosted by France’s armed forces holds a clue to the character of the country’s unexpected new leader.
“I asked for ammunition last year (2016) … but never received it,” Doumbouya said in the speech, which was published alongside others on the website of EMSOME, a section of France’s armed forced that specialises in overseas missions.
“On the other hand, the French who come to provide training for us will immediately receive everything they need.”
The short speech reveals the frustrations of a politicised soldier who bristled at his lack of power and influence, and what he considered a paucity of support and respect for Guinea’s military.
French and American troops enjoy greater access to the corridors of power across Africa than domestic forces, he said.
“Our rulers prefer to trust them rather than us, and consider them to be real advisers, functions we will never achieve.”
“Whites hold a power that is unattainable to us,” he said.
Doumbouya was not reachable for comment on Monday. Army officials could not be reached to confirm his past request for ammunition.

It’s become a familiar sight in West and Central Africa in recent months: a little-known but experienced soldier sits behind a desk and says he is in charge. Events in Guinea on Sunday follow two takeovers in Mali since August 2020, and one in Chad in April.
Not much is known about Doumbouya’s early life. Local media reports say he is an ethnic Malinke, like Conde, and comes from the eastern Kankan Region.
According to a biography circulated by Guinea intelligence officials on Sunday, he has 15 years of military experience including missions in Afghanistan, Ivory Coast, Djibouti and Central African Republic.
He underwent training in Israel, Senegal and Gabon, and the War College in Paris. He served in the French foreign legion. The French defence ministry declined to comment citing the “current situation in Guinea”. Spokespeople in the other countries could not immediately confirm this information.


Doumbouya was appointed head of a special forces unit created in 2018 to counter the growing threat of militants in the region. The unit was seen as Guinea’s best trained and equipped.
It is unclear so far what kind of support Doumbouya has across the armed forces. Still, the information provided by officials paints a rosy picture.
He is “able to identify and defuse risky situations by remaining calm in the face of a hostile environment and extreme pressure,” the biography said.