Home Politics The claim that Ugandans are funded to protest, ‘ ‘Is an insult,... 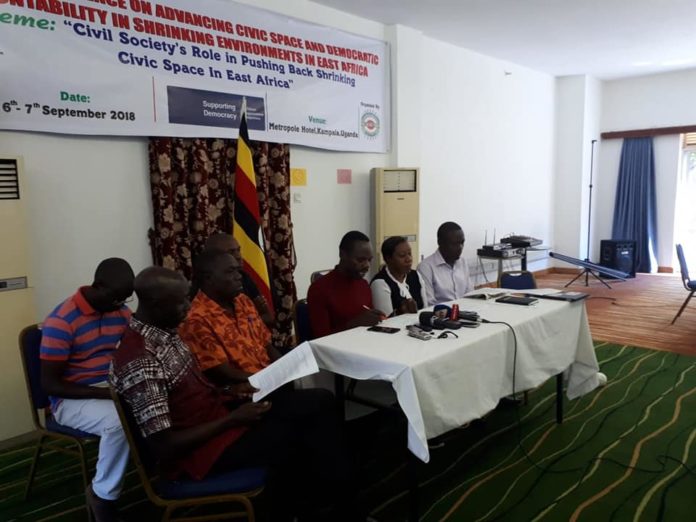 Members working in and associated with civil society fraternity in Uganda, have described the recent statement by the President Museveni and Ministers referring to (NGO’s) and Civil Society in general as hooligans and agents of “foreign interests” as untrue and meant to divert Ugandans from the real issues affecting them


Minister of Security at a recent media conference said that NGOs were involved in funding demonstrations across the country.
At a Regional Conference on Advancing Civic Space and Democratic Accountability in Shrinking Environments in East Africa, when tasked to respond to these statements, the Minister of State for East African Affairs indicated they were investigating some NGOs.

In statement issued by six NGO’s including: The Uganda National NGO Forum, ActionAid Uganda, Public Affairs Center, Soroti , Centre for Constitutional Governance, Kampala, Western Ankole Civil Society Forum, Ankole and Akina Mama wa Afrika, the NGO’s noted
‘’ We would like to remind government and its leaders that as citizens of this country, we have a right and responsibility to engage in activities to influence public policy and governance processes, including through peaceful demonstrations. This right is guaranteed and protected Under Articles 29 and 38 (2) of the Constitutional of the Republic of Uganda and under various international instruments to which Uganda is a signatory.’’


On foreign funding
‘ ‘The assertion that, because NGOs receive funding from donors to finance their interventions, in some way makes them agents of foreign interests as not only disingenuous but also dishonest. We all know that the Government of Uganda receives support of about 40% of the total development expenditure from external sources with as high a dependency as 85% for certain critical sectors. If we were to follow the illogical claims by some officials from government, one would conclude that our own government is an agent of foreign interests.’’


issues government must own up and address
The NGO’s also list what they think are real issues government must fix.
The growing dissent expressed by Ugandans singly or collectively are in part a result of failure of government to address critical issues affecting majority of people: unemployment, poor service delivery, inequality, rising insecurity and wanton theft of public funds, which some call corruption.


‘ ‘ Instead of reprimanding brutal agents of the security, we have seen them being praised for maiming or killing Ugandans. We have heard the president and his ministers downplaying torture and claiming it never happened, not ashamed to even refer to government’s anti-torture laws, they are expected to defend rather than abuse.’’