Home Politics ‘The 29m is a bribe to get Museveni a life presidency’ –MP.... 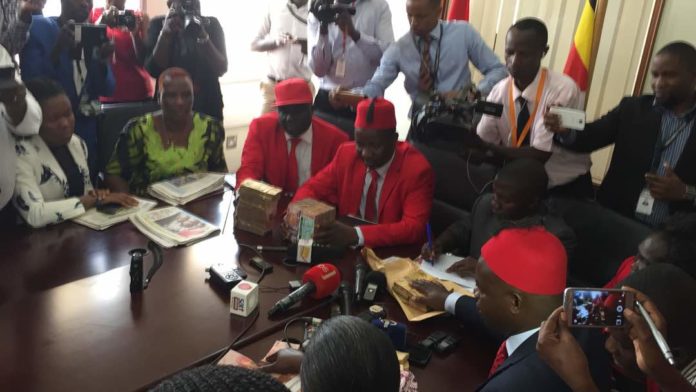 Six opposition Members of Parliament on Wednesday returned the Ugx. 29 million they branded as bribe.
The MP’s also agreed to write to the Inspector General of goverment to undertake an investigation into the source of the 13billion given to MPs as consultation fee for amendment of Article 102 (b) of the 1995 constitution also known as age limit bill.
The lawmakers say the consultation money is mis-allocated and is supposed to be serving other purposes of national importance.


The Opposition Whip and Kira Municipality MP Semujju Nganda told journalists on Wednesday that they were returning the money to the Parliament officer in charge of the Consolidated Account.
Butambala MP Muwanga Kivumbi said “The money is immoral and should be returned by all MPs. Leaders should be mindful of integrity. You cannot just eat money without minding your own suffering people.
Hon Medard Seggona said “I cannot be bought to procure President Museveni a life presidency,” he said.
On his part, the Soroti MP Angelina Osege termed the 29 million as “cursed money,” This is not first time opposition MPs are returning money given to them.

Towards 2001 elections, the MPs were given 20m each reportedly to monitor programs of the National Agriculture Advisory Services.
A number of opposition legislators including Nabilah Sempala, Erias Lukwago, Betty Nambooze and Latif Ssebagala, returned the money.
In 2004, each NRM MP was given five million to remove Presidential term limits. No legislator returned the money.


In April 2013, all the MPs were given 5m on the directive of President to consult their constituents on the controversial marriage and divorce Bill. This time around 19 opposition MPs returned the money accusing the president of using the money to corrupt them.
Again in 2015, the MPs received 100 million each as fuel arrears to “facilitate” them ahead of the 2016 general election.