Home Business Tens of millions in Africa on the brink of famine- World Food... 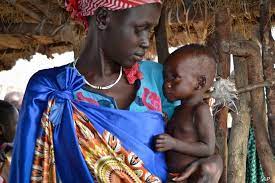 The World Food Program warns tens of millions of people, mainly in Africa, are teetering on the brink of famine because of conflict, climate shocks and economic downturn due to the COVID-19 pandemic.
The U.N. food agency estimates more than 270 million people, most of them in Africa and the Middle East, around the world are acutely food insecure, with millions at risk of starving to death.


It says the number of people at imminent risk of famine has increased from 34 million last year to 41 million now.
Without immediate emergency food aid, World Food Program spokesman Tomson Phiri warns the slightest shock will push those extremely vulnerable people over the cliff into famine. He says more than half-a-million people already are facing famine-like conditions.

“These are people in Ethiopia’s Tigray region, Madagascar—particularly in the southern part, South Sudan, especially now as we are now at the height of the lean season in that country and Yemen,” Phiri said.
Phiri says Nigeria and Burkina Faso also are of particular concern because in recent months pockets of people have been in a state of famine. He says the WFP is mounting the biggest operation in its history to avert the catastrophic situation from taking hold.


“WFP is focused on scaling up life-saving food and nutrition assistance to meet the essential needs of those furthest behind, overcoming access challenges and expanding cash-based transfers with significant scale-ups foreseen across several operations,” Phiri said.


Phiri says the WFP is targeting its food assistance program to 139 million people in countries at particular risk, including Ethiopia, Lebanon, Afghanistan, Sudan, and Syria. He says the WFP will need $5 billion to carry out the mammoth operation this year.