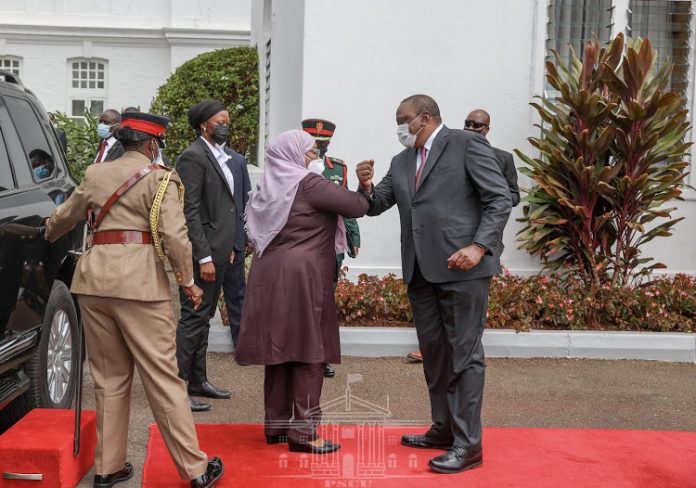 Tanzanian President Samia Suluhu crowned her two-day State visit to Kenya with a declaration that her administration will pursue cordial relations with Kenya but cautioned politicians from both sides against fanning unnecessary tensions.

Addressing a joint Parliament sitting, an honour last extended to Tanzanian President Jakaya Kikwete in 2015, President Suluhu, urged MPs from both Houses to make laws and policies that foster unity between the two countries.
In her 44-minute speech, President Suluhu said during her reign, she will not allow anybody to divide Kenya and Tanzania saying the two countries are stronger together in all aspects.

“Help us to make laws that foster unity. Let’s not promote disunity in our Parliaments,” President Suluhu told the lawmakers.


She further said: “Help us nurture a good relationship between the two countries. You are representatives of the people and you are the ones who make laws that guide the government over its relation with other countries.”
In her address interrupted by foot thumping applause by MPs, President Suluhu said Kenya and Tanzania are stronger together warning that any kind of disunity between the two countries threatens the viability of the East African Community.

“To those people who think that we are rivals and that we can develop without each other, I want to tell them that such kind of thinking is not only narrow-minded but retrogressive,” President Suluhu said.
She said during her reign she will ensure that the good relationship between Kenya and Tanzania is restored since none can exist independently without the other.


The Tanzanian Head of State termed the diplomatic tiff between the two neighbours as unnecessary and should not be allowed to take root.

“In our talks with President Kenyatta, we realised that we share a lot together than what divides us,” President Suluhu said.
“For instance, instead of fighting over tourism, let’s see how we can convince the tourists to spend more time both in Kenya and Tanzania,” she said.

She said she got many invites from other countries but chose Kenya for her first official visit not because of the distance but because of the significance of good neighbourliness.
“Anytime we have any kind of differences, let’s sit down and talk and have a way forward. Tanzania will continue to be a good friend to Kenya and a standing member of the East African Community,” President Suluhu said.
“I have come to Kenya to strengthen our relationship, I have come to tighten the bolts where they were loose,” she said, amid applause from the 118 MPs allowed into the Chamber due to Covid-19 social distancing rule.


She said going forward, Kenya will be Tanzania’s key ally in all aspects and they will work together not only in development matters but also working towards opening opportunities for citizens of both countries.
President Suluhu told MPs there were 25 Tanzanian companies registered in Kenya with a combined value of Sh19.33 billion and that they have employed 2,600 Kenyans.

He added the number of investors between the countries can increase significantly if both nations work together.
To kick-start the cordial relationship with Kenya which she said will not be deterred, the Tanzanian leader said President Kenyatta will be the chief guest in Tanzania during the celebration of 60th year of independence in December.


She emphasised that the two countries should work together in managing the spiralling Covid-19 pandemic.
“I believe that we can work together to deal with the virus so that our people can go back to their normal lives,” President Suluhu said.

She said her visit to Kenya has achieved a lot through the signing of several bilateral agreements with President Kenyatta.


“This visit has achieved a lot and the remaining part is now for you to help in the implementation,” President Suluhu said.
Nation Africa