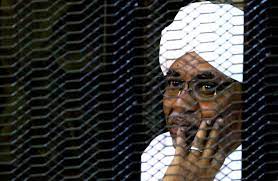 Sudan’s transitional administration will meet to endorse a Cabinet decision to hand over suspects accused of war crimes to the International Criminal Court, including former dictator Omar Al Bashir, the country’s foreign minister said.
Sarah Al Mahdi did not say when the joint meeting of the Sovereignty Council and Cabinet would take place.
The minister released a statement after meeting ICC prosecutor Karim Khan, who is currently visiting Khartoum.


Al Bashir and others – including former ministers Ahmed Haroun and Abdel Raheem Muhammad Hussein, and former leader of the Justice and Equality Movement, Abdallah Banda Abakaer Nourain – face charges of genocide and crimes against humanity in Darfur. The Justice and Equality movement is one of the main rebel groups in Darfur.
Nourain is at large but the others are in detention.
“The Cabinet has agreed to hand over individuals wanted by the International Criminal Court and approved the Rome Statute of the court. Both decisions will be reviewed by the Sovereignty Council and the Cabinet in a joint meeting to ratify the decision to hand them over and approving the statute,” Ms Al Mahdi was quoted in a statement as saying to Mr Khan.

Al Bashir has been in detention since his ouster in April 2019. He was convicted nearly two years ago of corruption and is currently facing separate trials linked to the 1989 military coup he led and the shooting death of protesters in late 2018 and early 2019.


He was indicted by the ICC in 2010 and 2011 for crimes in Darfur, a vast region in western Sudan where a bloody and ruinous insurgency took place in the 2000s.
The UN says 300,000 people died in that conflict and about 2.5 million were displaced.