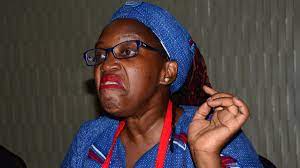 Activist Dr. Stella Nyanzi has decried harassment and threats from Kenyans following her stance on human rights.
Through her Facebook page, the vocal activists highlighted the plight of refugees living in Kenya, after a young man who was allegedly burnt to death over his sexual orientation.
The gay men who suffered burns during an attack at a Kenya refugee camp last month died.


The man passed away at a hospital in the Kenyan capital of Nairobi on Monday. The Refugee Coalition of East Africa, which includes Kenya-based groups that advocate on behalf of LGBTQ refugees, identified the man as Chriton, who was also known as Trinidad.
“It is with deep sadness and anger that we have had to say goodbye to our fellow queer refugee, Chriton, aka Trinidad,” said the Refugee Coalition of East Africa in a press release.
The former Kampala Woman MP Candidate in the 2021 elections, Stella Nyanzi in her activism, condemned the actions and called for a probe into the same while ideally pledging to highlight more similar cases.

This did not go well with Kenyans on social media reminding her that she was a refugee.
“Last night I briefly shared the sad news of the death of a refugee who was burnt along with several others in Block 13 of Kakuma Refugee Camp in Kenya. I am still shocked by many of the responses,” she posted
“Another horribly evil group of human beings me to be quiet because I’m a foreigner seeking refuge in Kenya. They ordered me to politely stay in my place lest they would withdraw their hospitality to me in their country. They forced me to be grateful that refugees have taken advantage of Kenya’s relative peace to seek refuge here for many years. They threateningly reminded me that the Kenyan government closed Kakuma and Dadaab camps and ordered all refugees to be withdrawn. They told me to go back home if I found Kenya hostile.’’
‘’This is Xenophobia!” she added.


Two months ago, the Ugandan activist fled to Nairobi, over what she termed as political persecution back home.
The long-time critic of President Museveni, arrived in Nairobi by bus. She is reported to have crossed the Uganda-Kenya border “in disguise” to avoid detection by security agents.