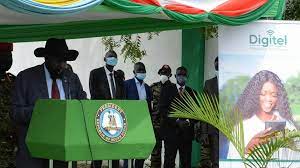 
“To our people who live in remote areas who need mobile service, the government is determined to bring mobile services to your locations,” Kiir said in Juba, adding that his government played a crucial role in ensuring Digitel operates in the country.
He revealed that remote areas like Maper in Rumbek North County of Lakes state and Pochala in Greater Pibor Administrative Area respectively are now connected to the mobile phone network.
The president assured that mobile connectivity to other remote areas like Boma in Greater Pibor Administrative Area and Kuron Peace Village in Kapoeta East will soon be completed.

“The government will explore options including tax exemption that will benefit importation of network equipment and telecommunication tools. These equipment will help increase the digital literacy program for our next generation ICT-driven economy,” he said.
Kiir noted that South Sudan needs to catch up with the rest of the world in terms of digital technology.
Athiei De Chan Awuol, Executive Vice President for Digitel said that the company is committed to delivering digital services across the country.


“For us to launch our telecom services and products at 10 years of our independence anniversary shows that South Sudanese can contribute towards a bright future for ourselves, for our children and for the next generation,” said Awuol.
He noted that the launch of Digitel demonstrates the commitment of South Sudanese to develop their country, adding that since 2011 the government has been working hard to attract foreign investors.