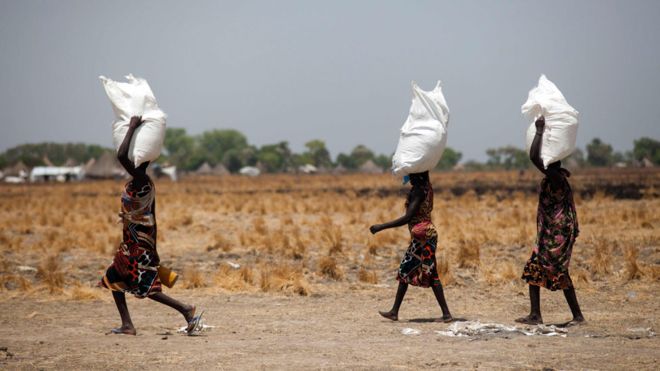 South Sudan is no longer classified as being in famine, although 45,000 people in Jonglei and Unity states are expected to remain in famine-like conditions and the situation is still critical, a U.N.-backed food security report -The Integrated Food Security Phase Classification (IPC) report based on a survey by a working group including government and U.N. officials.
An estimated 6 million people, half the population, are expected to be severely food insecure this month and next, up from 5.5 million in May, the report said.


Reuters quotes report saying there was no longer famine in counties in the north of the country where it was declared in February. However, there were concerns about another region in the country’s east, bordering Ethiopia, that was once called Jonglei state.
“The conflict-related displacement of over 200,000 people from northern, central, and eastern former Jonglei has severely disrupted livelihoods and access to social services, thus severely undermining food security in the state,” Reuters reported.

When is a famine declared?
The Integrated Phase Classification system classes a famine as:
• At least 20% of the population has access to fewer than 2,100 kilocalories of food a day
• Acute malnutrition in more than 30% of children
• Two deaths per 10,000 people, or four child deaths per 10,000 children every day


Two years after emerging as an independent state, the oil-rich country was plunged into conflict in December 2013 as rivalry between President Salva Kiir and his then-vice president, Riek Machar, exploded into violence.