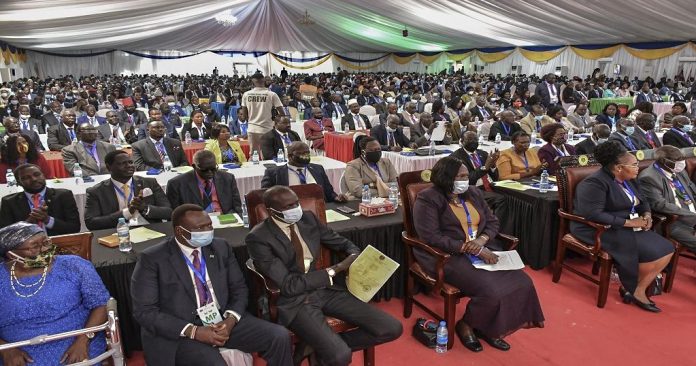 South Sudan media rights groups condemned comments by a key parliament member who said that news organizations could have their licenses revoked if they report on parliamentary expenditures — including lawmaker salaries — without prior authorization from the speaker.
Paul Youane Bonju, who is the chairperson-designate of the information committee in South Sudan’s reconstituted National Legislative Assembly, said journalists risk being sued if they do not follow what he termed the proper procedure for reporting on lawmakers’ financial transactions.


“Some [reporters] are new in the field and I need to bring them on board by trying to tell them the right procedures if they visit the parliament, because the parliament is a body that enacts laws,” he said in a news conference last week.
“If you are coming to engage with such a body, you must also be conversant of how to go about it,” Bonju said. “In some instances, some of the media, instead of coming to me or going to the office of the clerk, sometimes they contact either the staffs, or they get the information from sources that are not authorized to release some of the information.”
Bonju cited media reports five years ago about $40,000 that was allotted to lawmakers by President Salva Kiir for allowances and car loans.

The reports about the allotment caused a widespread backlash in the world’s newest country, where the government owes many workers back salaries and the average teacher makes less than $400 per year.
Media groups say Bonju’s comments are an attempt to conceal information from the public as South Sudan attempts for forge a shaky democracy.
Micheal Duku, executive director of the Association for Media Development in South Sudan, said parliamentary members cannot stop the media from reporting on their work which is in the public interest.
“The media is regulated by law and when it comes to information that is categorized, there are classified information and unclassified information,” Duku told VOA’s South Sudan in Focus. “So long as this falls under unclassified information, the public has the right to know.”


Bonju’s comments come as South Sudan journalists are facing increasing pressures on their reporting.
Three journalists recently were detained, and a radio station was closed as the government clamped down on efforts by activists to stage what they called a peaceful public uprising.
Agents also detained a government broadcaster after he allegedly declined to report news about recent presidential decrees on the South Sudan Broadcasting Corporation airwaves.
South Sudan ranks 139th out of 180 countries in the 2021 World Press Freedom Index compiled by Reporters Without Borders, in which 1 is the freest.
The reconstituted legislature was inaugurated in August this year by Kiir under the leadership of Jemma Nunu Kumba as speaker of the house.


In an interview with South Sudan in Focus, Bonju said his comments were aimed at clarifying parliamentary procedures for press coverage.
“I was telling them, ‘Look, I am not warning you, but I am rather cautioning you to be sure that if you want anything to do with emolument of the MPs, please contact the relevant offices, the relevant departments,'” he said.
VOA