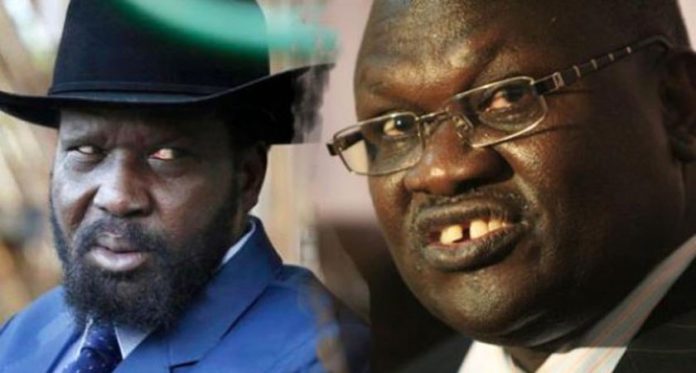 
The South Sudan Equatorial Community in Diaspora said the two leaders have been incriminated in various reports for gross human rights violations, war crimes, displacement of the populations and destruction of livelihoods.
Group leader Federico Vuni said Upper Nile and Equatorial regions were the worst-affected by the war between the factions loyal to the two protagonists.

“There are already reports incriminating them and they should be indicted for the crimes committed in the ongoing conflict,” Mr Vuni said.
He added that the two leaders’ respective deputies, Mr Taban Deng Gai and Mr James Wanni Igga, should equally be charged with similar crimes.


“All the four bear the responsibility for the crimes committed in South Sudan and deserve to face the international court. If we want a just peace, then they must account for the heinous crimes they have committed,” he added.
Mr Vuni also asked the international community to join efforts and unseat all the four leaders.
“They are the obstacles to peace. They have led the country since 2005 but have only achieved destruction to lives, the economy and social fabric. They must be sent home,” he noted.


South Sudan attained independence from Sudan in 2011 but descended into a civil war two years later.
The war erupted following a power wrangle between President Kiir and his former deputy Dr Machar.
The war has caused one of the largest humanitarian crises in the continent, according to the UN.


About two million South Sudanese have become refugees in neighbouring countries.
The International Crisis Group estimates that more than 100,000 lives have been lost in the young nation from from 2013 to 2015 alone.
//// thecitizen