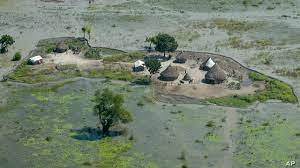 Authorities in Unity state say at least seven people are reported dead after floods submerged several homes in Mayendit County in recent days. The floods have also displaced about 400 families, officials say.
Mayendit County Commissioner Gatluak Nyang told VOA’s South Sudan in Focus that heavy rains had intensified over the past few weeks.
Seven people died of drowning, and 17 people have been bitten by snakes, Nyang said.
The floods destroyed infrastructure, houses and the livelihoods of hundreds of people. Nearly 90% of the land in Mayendit is submerged, Nyang said.


Nearly 400 families fled to higher ground for safety, and more than 500 head of cattle and 300 goats died in the flooding, he said.
“People are facing very, very bad situation in health,” Nyang said. “There are many diseases … because the hygiene is very poor. They have lack of shelter, and there is lack of mosquito nets, and people have malaria.”
Nyang urged aid agencies and the national government to provide food, shelter and medicine to prevent waterborne diseases from spreading.
John Juan Bum, executive director of the Relief and Rehabilitation Commission in Unity state, has issued a plea for help.

“We have submitted the comprehensive emergency and disaster report this morning to UNCHR as well as the NGO (nongovernmental organization) forum so that they share it with all the partners on (the) ground, such as to respond or at least initiate a rapid response,” Bum told South Sudan in Focus.
Kai Yer, a United Nations High Commissioner for Refugees (UNHCR) coordinator in Unity state, said he had yet to receive full reports on the extent of the damage.
“We have not got the details,” Yer said.


Torrential rains across South Sudan have repeatedly devastated several parts of the country, including Jonglei and Lakes states and parts of Central and Western Equatoria states.
Between July and September 2020, about 800,000 people were affected by flooding in areas along the White Nile River, forcing entire communities to flee to higher ground, according to the South Sudan government and aid agencies.