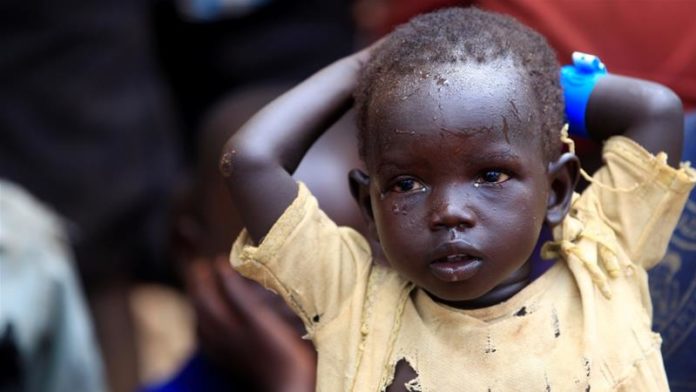 More than one million children have now fled South Sudan where escalating conflict is ravaging the country, UNICEF and UNHCR, the UN Refugee Agency, announced on Monday.
“The horrifying fact that nearly one in five children in South Sudan has been forced to flee their home illustrates how devastating this conflict has been for the country’s most vulnerable,” said Leila Pakkala, UNICEF’s Regional Director for Eastern and Southern Africa. “Add this to the more than one million children who are also displaced within South Sudan, and the future of a generation is truly on the brink.”
Children make 62 per cent of more than 1.8 million refugees from South Sudan, according to the latest UN figures. Most have arrived in Uganda, Kenya, Ethiopia, and Sudan.


“No refugee crisis today worries me more than South Sudan,” said Valentin Tapsoba, UNHCR’s Africa Bureau Director. “That refugee children are becoming the defining face of this emergency is incredibly troubling. We, all in the humanitarian community, need most urgent, committed and sustainable support to be able to save their lives.”
Inside South Sudan, more than one thousand children have been killed or injured since the conflict first erupted in 2013, while an estimated 1.14 million children have been internally displaced.

Nearly three quarters of the country’s children are out of school — the highest proportion of out-of-school children in the world.
The trauma, physical upheaval, fear and stress experienced by so many children account for just part of toll the crisis is exacting. Children remain at risk of recruitment by armed forces and groups and, with traditional social structures damaged, they are also increasingly vulnerable to violence, sexual abuse and exploitation.
More than 75,000 refugee children in Uganda, Kenya, Ethiopia, Sudan and DRC have crossed South Sudan’s borders either unaccompanied or separated from their families.


Refugee families fleeing to neighbouring countries in search of shelter and safety are facing a double catastrophe this rainy season, with children most at risk from the health and protection risks associated with inadequate shelter. Much greater support is needed to ensure that every refugee family has somewhere safe to live, as well as urgent humanitarian assistance including food, water, protection, education and medical care.


UNICEF’s appeal for South Sudan and South Sudanese refugees in the region – which calls for US$181 million to address the acute needs of refugees until the end of the year – is currently only 52 per cent funded.
UNHCR staff are at the frontline of the crisis, meeting South Sudanese refugees as they flee across borders and providing lifesaving assistance but chronic underfunding in 2017 is putting critical services at risk. The UNHCR funding appeal for South Sudan situation of US$ 781.8 million is only 11 per cent funded.