Home Environment “Securing Your Future” or Greenwashing? The Unpleasant Truth about Uganda’s Oil 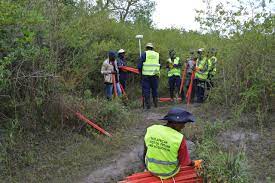 Barely a month after the world’s most important climate summit of the year, COP26, the President Yoweri Museveni, is touting the notion of “safer uses of oil.” During his recent visit to Tanzania for an Oil and Gas Symposium on 27th November 2021, he acknowledged the impact of fossil fuels on climate change by stating,
“There is now awareness that some uses of petroleum generate gases that create a blanket effect in the atmosphere that warms the temperature of the globe, melts the ice-sheet and the glaciers and causes the sea to rise and unpredictable rain patterns.”
a

No leader should subject his country to such dire consequences and push the lives of its already struggling citizens into deeper vulnerability
From his statement, the President undoubtedly demonstrates a deep understanding of the danger of continued fossil fuel use and the resulting effects on the mounting climate crisis. However, the President went on to counter his own brilliance through greenwashing by indicating that climate change is “not the fault of oil”, rather, “it is the fault of misusers.” Consequently, he emphasized that “Uganda shall use fossil energy for another 40 years.” He further echoed his support for the clean energy movement through the use of hydro, solar, wind, geo-thermal and woefully he added the less carbon-emitting albeit highly toxic nuclear energy. The President went on to list 8 “safer uses of oil” among them car tyres, chairs and car-seats, polyester for textiles to mix with cotton, medicine, bitumen (asphalt), cosmetics, detergents, and packages. Seemingly convinced by this “safe-list”, he added, “The environment issue is no longer green-house gases but waste-disposal…East African pipeline business is a good, durable business. It will create jobs during construction and after.”
a

Uganda has been in the spotlight for its mega fossil fuel projects which involve oil exploration in Tilenga by French oil giant, TotalEnergies, mainly inside Murchison Falls National Park, a further share allocated to China National Offshore Oil Corporation (CNOOC) in Kingfisher, within the Lake Albert basin, and the East African Crude Oil Pipeline (EACOP), stretching 1,443km among other infrastructural developments. The pipeline will be heated all through as it traverses from the western border of Uganda all the way to Tanzania’s Eastern border, culminating at the port of Tanga near the Indian Ocean. The heated pipeline will cut through the most sensitive ecosystems in Queen Elizabeth National Park, which is home to wildlife and rare species of flora and fauna that enrich the biodiversity of the region and cross over the Lake Victoria basin which is a source of water and livelihood for over 40 million people. Moreover, the pipeline is expected to generate approximately 34 million tonnes of carbon into the atmosphere annually, setting the pace for an almost irreversible path towards extreme global temperatures beyond the safe recommended levels of 1.50C in accordance with the Paris Agreement.
What’s worse, the pipeline will also pass through communities and displace over 100,000 people, most of whom are already lamenting of delayed and little to no compensation . Those who dare speak up about the injustice happening to them, their families, and their land are subject to constant intimidation. Late October, six activists were arrested as part of the ongoing effort to intimidate and silence critics of the oil projects.
a

This harmful EACOP project has nonetheless been touted as the key to unlocking East Africa’s future. However, the value of Uganda’s oil reserves has already fallen by approximately 70% since 2013
This value is expected to fall even further as the world transitions into a low-carbon economy. Uganda thus risks being saddled with stranded assets that will put further stress on the economy and pile decrepit and polluting infrastructure in the country, spelling major health impacts on the people. The proponents of the pipeline continue to claim that EACOP will create short-term employment for highly skilled and semi-skilled professionals, as well as casual laborers over a period of 2-3 years. This is a clear indication that possible employment for locals will only be short-lived. In Uganda, public debt is already projected to rise to 54.1% by 2023. The EACOP project thus risks driving East Africa further into unsustainable debt at the mere prospect of reaping meager earnings with the only entities bound to benefit being the foreign multinational oil companies.
a

Despite every indication that the pipeline poses numerous risks , the parliament of Uganda rushed to pass the controversial EACOP Bill, which is bound to be in contravention to the Ugandan constitution . It is apparent that President Museveni, while promising to secure the future of the citizens, is instead outrightly going against his duty of leadership to the citizens of Uganda, and engaging in greenwashing tactics to enrich a few oil companies at the expense of the people and the beautiful and rich ecosystems of East Africa. What’s certain is that there is nothing safe or useful about EACOP other than the impending destruction that it’s bound to cause not only to Uganda but to the world at large. No leader should subject his country to such dire consequences and push the lives of its already struggling citizens into deeper vulnerability.