Home Politics Rwanda-Uganda crisis: “with good faith & resolve, we can end this crisis.”-Rwanda... 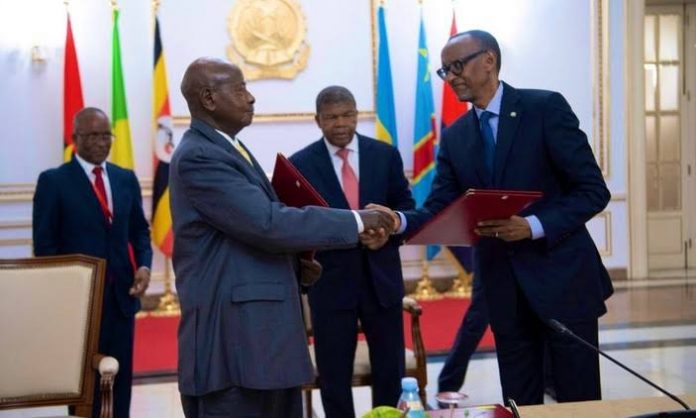 President Yoweri Kaguta Museveni and his Rwandan counterpart, Paul Kagame are on Sunday expected to meet in Luanda, the Angolan capital in a second face to face talks to resolve a border dispute between the two brotherly countries.


A brief statement from the Angolan Foreign Affairs Ministry said the two Heads of State will be joined by the Democratic Republic of Congo’s Felix Tshisekedi in a Quadripartite to be chaired by the host, Joao Lourenco on Sunday.

“President Joao Lourenco has invited his counterparts Yoweri Museveni (Uganda), Paul Kagame (Rwanda) and Felix Tshisekedi (DRC), for another Quadripartite Summit in Luanda this Sunday. Security matters and regional cooperation will be at the heart of the discussion,” the statement reads in part.
The presidents are expected to review the August 2019 peace pact signed by the duo in the same country. It will also be the second time the two presidents are meeting since August last year.


During the last meeting, Uganda and Rwanda committed to a memorandum of understanding to be observed by both parties.
The two agreed to among others; Respecting of the sovereignty of each other’s and of the neighboring countries, refraining from actions conducive to destabilization or subversion in the territory of the other party and neighboring countries, thereby eliminating all factors that may create such perception, as well as that of acts such as the financing, training and infiltration of distabilizing forces.


Rwanda’s Minister of State for East African Affairs Ambassador Olivier Nduhungirehe said “with good faith and resolve, we can end this crisis.”
Kigali accused Kampala of detaining her citizens and supporting armed groups that want to overthrow the administration there. While Uganda says Rwanda had infiltrated her security agencies.


Early this week, in his to diplomats in Kigali, President Kagame revealed that “he was not about to tell his citizens to return to Uganda because he has no control over their while in Uganda”.