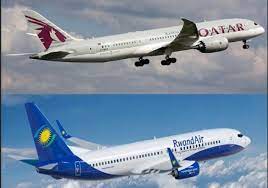 Rwandan government is in “final talks” with Qatar Airways over the sale of a 49% stake in RwandAir , Minister of Finance and Economic Planning Uzziel Ndagijimana has said.
“We are in the final stages of negotiations, and the carrier will be stronger due to the larger number of aircraft and greater resources,” Ndagijimana told Jeune Afrique.
Rwandair has been posting losses since it was launched. However authorities say it was a significant economic driver enabling tourism and trade.


The airline’s 2019 accounts lodged with the US Department of Transportation in February show it registered an overall loss of $26.2M in 2019 against revenue of $221.4M.
Its loss in 2018 amounted to $61.9m. So far, its only profit was in 2014 with a modest $2.82m surplus.
Tactical move-deals for the long-term
Rwanda is around 2,000 nautical miles from Qatar, and it is a landlocked country in East Africa. Therefore, on paper, it seems like it is not such a strategic investment. However, in reality, the move could be a masterstroke from Qatar Airways.

Since 2017, Qatar has been blocked from overflying the airspace of several of its neighbors, including Saudi Arabia, the UAE, Bahrain, Egypt, and Jordan. Therefore, its national carrier has had to find alternative yet efficient ways to conduct some of its routes.
Since the ban doesn’t apply to non-Qatari carriers flying to Qatar, RwandAir could carry passengers from Africa over the blocked airspace to Doha. Subsequently, passenger activity between Qatar and Africa would continue over the blocked areas without restriction. Moreover, Qatar Airways’ stakes in the Rwandan airline and airport means that it also gets a handsome slice of the pie.


The move will also pay off for all parties in the long run. There is massive potential for growth in Africa, but a few key airlines such as Ethiopian, Egypt Air and, Royal Air Maroc have an overwhelming presence in the continent. the African aviation activity set to reach new heights by the time this decade is over