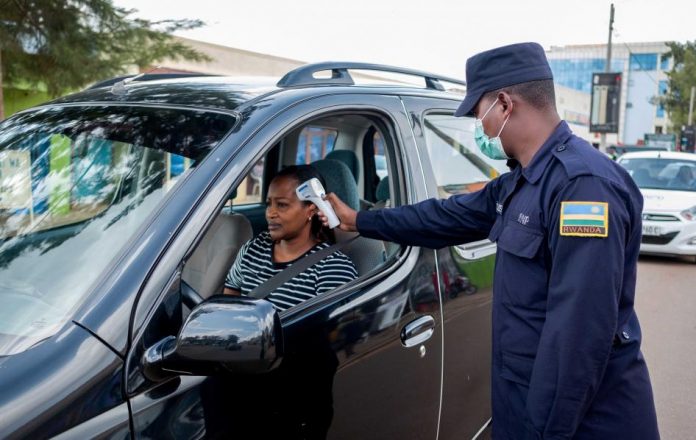 With over 150, the total number of confirmed infections, Rwanda has the third highest number of Coronavirus cases in East Africa.

Rwanda, the first country in Africa to impose a lockdown to combat coronavirus, Unnecessary movements and visits outside the home are still not permitted, except for essential services such as healthcare, food shopping, or banking.

The steps are: 1. Log on to: http://mc.gov.rw or dial *127# 2. Personal details: Type in your name, national ID and telephone number. 3. Enter details of your journey: Point of departure and destination 4. Reason for movement and vehicle number plate

You are also required to fill in their departure/return date and time. You will receive an sms notification from Police for approved movement or rejected movement.
‘ ‘Be ready to present it in case your are stopped’’ the law enforcing body added.
Only cargo trucks are allowed to operate in the country. Schools, places of social gathering, public transport and borders remain closed.


The lockdown directives, which have been extended until April 30, ban “unnecessary” movements, including for exercise; shut schools and places of worship; and ban travel between cities and districts and close borders, except for cargo and goods as well as returning Rwandans and residents, who are placed in 14-day mandatory quarantine

Meanwhile, Human rights watch has accused, Rwandan police of arbitrarily arresting scores of people since directives to prevent the spread of Covid-19 came into force on March 22, 2020.
The authorities have accused people of violating the measures and at times detained people in stadiums without due process or legal authority.


‘ ‘Rwandan authorities should end the arbitrary detentions, including of journalists and bloggers trying to expose abuse, and ensure that security forces respect rights when enforcing the measures. Reports of killings, rapes, and other serious crimes by security forces during the lockdown should be promptly and transparently investigated and those responsible held to account.’’ The rights body said


In a video posted on Ishema TV’s YouTube channel on April 3, three women from Kangondo II – a poor neighborhood also known as “Bannyahe,” in Remera sector of Kigali, the capital – told journalists that soldiers enforcing the lockdown raped them. One victim said that one night in March, a man in military uniform with a gun came into her house and raped her, while another hung her husband up by his legs from the window and beat him.


In the other news, the loss-making, RwandAir has announced more salary cuts staff
The Airline’s Chief Executive Officer, Yvonne Makolo told staff in a memo dated April 24 that since RwandAir has “lost all revenue streams yet we are required to sustain the airline’s direct costs to keep the business running,” there will be “net salary cuts depending on the current salary structure/grading.”


The cuts will range from 8% to 65% off the net salary with the lowest paid getting the 8% cut and the highest getting the 65% cut.