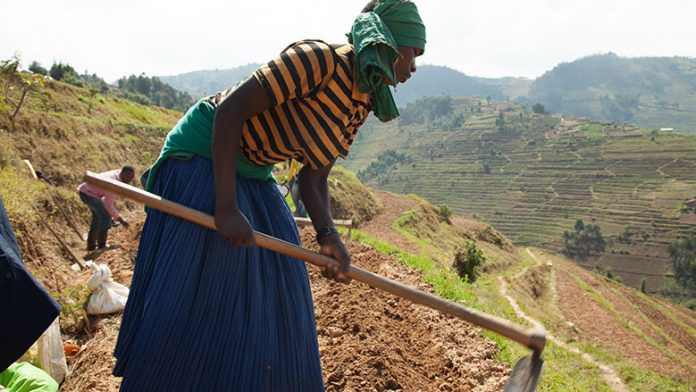 Rwanda Government has launched the National Agriculture Insurance Scheme (NAIS) that will mitigate risks and losses incurred by farmers due to unpredictable natural disasters, pests and diseases that affect their livestock and crops.


Dubbed “Tekana Urishingiwe Muhinzi Mworozi,” the scheme which is subsidized up to 40% by the Government of Rwanda, will also enable the farmers to easily access financial services and ensure flow of credit to the agriculture sector.
The market premium rate is 4.5% for livestock insurance while the premium rate for crop insurance will be decided at the beginning of the agriculture season 2020A.


Speaking at the launch of the scheme in Nyanza district, Minister of Agriculture and Animal Resources, Dr. Geraldine Mukeshimana, underlined that the Scheme is in line with the government’s moveto improve livelihoods of citizens through capacity building and providing support in their respective professions in order to eradicate poverty and maintain the country’s economic growth.
“We believe that this insurance scheme will empower farmers since their activities will be insured by reputable insurance companies to manage risks and losses amongst the smallholder farmers. Our intention is to get all smallholder farmers covered with this insurance scheme” Minister Mukeshimana said.


This insurance is being implemented through a multi-agency framework composed of selected insurance companies under the overall guidance and control of the government.
Agriculture is the backbone of Rwanda’s economy. The sector accounts for a third of the country’s GDP and close to 70% of working individuals aged 16 years or above are employed in agriculture (EICV 4). With the National Agriculture Insurance Scheme, the country’s economy will be able to move from a culture of providing ad hoc support to farmers in the aftermath of large production shocks towards a system of pre-planned and budgeted agriculture insurance.


As per the National Strategy for Transformation (NST1), Agriculture is central to the structural transformation of Rwanda’s economy, therefore contributing to economic growth, exports, job creation, increased land and labour productivity.