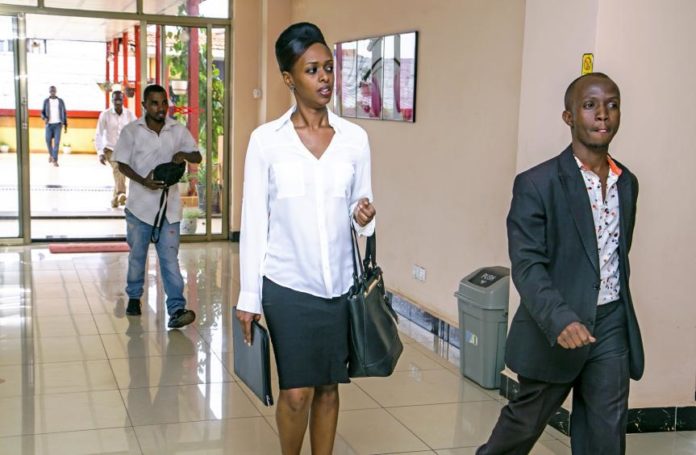 Rwandan opposition party, Parti Sociale Imberakuri (PS-Imberakuri), is launching an investigation into how failed presidential candidate Diane Rwigara illegally accessed and used party documents including identification papers of party members to solicit components required to run for Presidency.
PS-Imberakuri party chairperson Christine Mukabunani told reporters, yesterday, that her party will be working with competent organs to establish how Rwigara was able to get hold of the party documents.
“What we know so far is that Rwigara illegally accessed confidential party documents including the list of our members and used it to accumulate the required number of signatures for her nomination papers,” Mukabunani said.
“We don’t know how this happened but we will work with responsible organs to investigate and take her to court,” she added.


Mukabunani disclosed that when some of her Party members learned that their names appeared on the list of those who endorsed Rwigara without their consent, they lodged complaints with the Party leadership.
“The next step is to investigate and thereafter we will ask responsible organisations to take action. A lawsuit is very likely.” she reiterated.
The New Times repeatedly contacted Rwigara for comment but all calls went unanswered.
The National Electoral Commission (NEC) disqualified Rwigara and two other candidates Fred Sekikubo Barafinda and Gilbert Mwenedata – for failure to meet the set requirements.

For Rwigara specifically, of the 600 signatures required from each aspirant, she managed to present 572 signatures. NEC also said that three people who ostensibly had signed for Rwigara had long died, one of them having passed on April 16, 2016 from Kibagabaga hospital in Gasabo District and laid to rest the following day in Busanza public cemetery.
The NEC chairperson Prof. Kalisa Mbanda said that, while verifying the list of people who endorsed Rwigara, It was established that they included a number of people who belong to PS-Imberakuri, adding that it contradicts the electoral code of ethics for an Independent candidate.


According Rwanda’s electoral code, independent presidential aspirants are required to present 600 signatures with at least 12 from each of the 30 districts of Rwanda, proof of Rwandan Citizenship and the birth certificate, among others.
Campaigns are scheduled to Kick off next Friday, July 14, and elections on August 3 for Rwandans in the diaspora followed by the general elections on August 4.
Source: The New Times