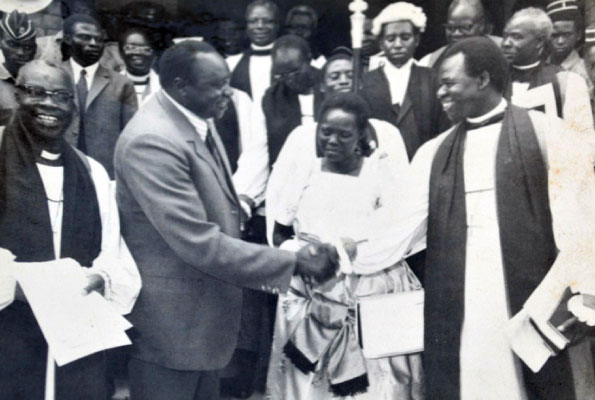 None of the violent deaths which disfigured Uganda’s recent history shocked   the world as that of the Anglican Archbishop Janani Luwum.

Since the late Amin captured power, the church had walked the tightrope between maintaining a good relationship with Amin, and at the same time defending its human flock

On February 17, 1977, Archbishop Luwum and two cabinet ministers were arrested and later killed for their alleged complicity in the coup plot.

According to the official Uganda government (Late Idi Amin Dada) version of the incident, Archbishop Luwum, the interior minister, Charles Oboth-Ofumbi and the land minister, Lieutenant Colonel Erinayo Oryema were killed in an accident as they tried to overpower their driver in an un-escorted security forces’ Range Rover. A spokesman said their vehicle hit a car and over turned and they were dead on being pulled out of the wreckage.

According to the Tanzanian Daily News, the Archbishop had, during interrogation by Amin and a number of other officers, refused to sign a confession and was ordered to lie on the floor

‘ ‘ His cassock was pulled up. He was then undressed. Two soldiers in turn whipped the archbishop. The archbishop started to pray. But the prayers seemed to incense Amin for he shouted wildly and started to use obscene language and then he struck the archbishop’’

The report went on: ‘ ‘ the archbishop’s ordeal was halted for 30 minutes-While Amin broke off to hear BBC’s World News’’ and  ‘ ‘Focus on Africa’’ programmes. Finally a furious Amin pulled out his pistol and fired twice into the Archbishop’s chest.’’

Amin later said, the Archbishop had plotted with others to overthrow his government and had died in a car accident ‘ ‘ as a punishment of God’’

The official version of deaths was flatly dismissed as apack of lies and sparked a wave of international protests by church leaders in Africa and Europe.

A week before his death the archbishop and the 18 other Ugandan bishops addressed an open letter to president Amin protesting at the deaths of many Ugandans. This letter may have been his death warrant. President Amin never accepted public criticism and the latter’s criticism of Amin’s security forces must have put the archbishop in the firing line.

Why Luwum was killed

A Ugandan who said had friends amongst President Amin’s bodyguards, said one of them told him Amin was badly in need of money for the construction of a Muslim mosque in Kampala.

Amin had approached Luwum and told him he wanted to have some of the British money for the church’s centenary monument channeled to Muslim Supreme Council to finish the Mosque, because the Supreme Council members had squandered the money sent from Saudi Arabia. Luwum told Amin the money was for use of Church he headed and that he had no authority to order it to be spent on other projects.

Amin, his bodyguard was quoted as saying, sent Lietutenat Colonel Erinayo Oryema, minister for land and water resources and one of Amin’s henchmen, to convince Lumum that the president was serious about the issue and to persuade the archbishop to yield.

The minister was unable to convince the archbishop. Oryema was an Acholi, like Luwum. So Amin sent his internal affairs minister, Charles Oboth-Ofumbi, also an Acholi to try again.but the Archbishop remained adamant.

Amin was afraid that when the International church authorities attending the church of Uganda’s centenary celebrations arrived in Uganda, he might be exposed for having threatened the Archbishop over the money.

With this fear rising in him, Amin had to take action. When an alleged plot to overthrow Amin was reported, the president took an opportunity to implicate the archbishop.

The archbishop was arrested and taken before Amin. Amin said he just wanted to check whether he had relented. He gave Luwum more time, telling him to go away and think again.

When the archbishop did not respond to the president’s ‘ ‘ requests’’, Amin squarely incriminated him in the coup plot. Aim guard said, and then he shot the archbishop in the room. The two ministers were shot because they were witnesses to the whole affairs.

Source: From pages of DRUM Magazine.