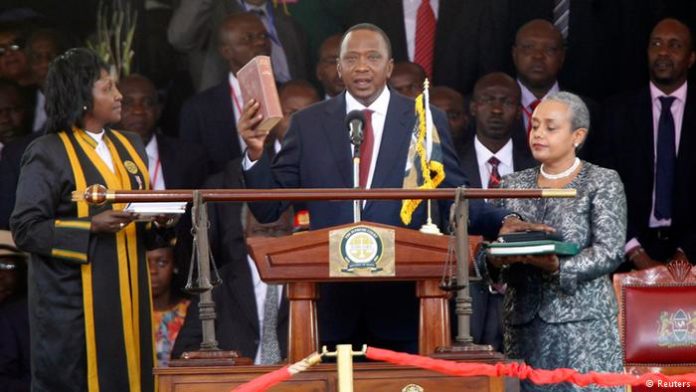 
Kenya President Uhuru Kenyatta was sworn in for second, five-year term on Tuesday, ending months of political turmoil in the east African nation. Chaos also marked the start of the swearing-in ceremony at the 60,000-seat Kasarani stadium, as Kenyatta supporters attempted to force their way into the venue, prompting police to fire tear gas while officers on horseback struggled to curb the flow of people.


Meanwhile Police fired teargas to disperse angry opposition supporters from holding a rival gathering, where Opposition leader Raila Odinga was meant to attend the “memorial rally” to honour more than 50 people killed, mostly by police, in four months of political upheaval. But police kept the planned venue strictly sealed off.


The pomp and ceremony ended with a 21-gun salute but was overshadowed by chaos in another part of Nairobi, where police engaged in running battles with opposition supporters trying to gather for a rally.
Kenyatta and his deputy William Ruto took the oaths of office in front of some 13 mostly African heads of state, including from South Sudan, Uganda, Rwanda, Zambia and Somalia. Prime ministers, foreign ministers and special envoys represented other African nations, as well as Qatar, Serbia, Ukraine and the United Arab Emirates.
The NASA coalition described Tuesday’s inauguration as a “despotic coronation”.

Raila Odinga vowed to found a “third republic” — following independence from Britain in 1963 and a new constitution adopted in 2010 — and pursue protests and economic boycotts aimed at undermining Kenyatta’s “dictatorship”. The current crisis draws on a deep well of social, ethnic and geographic grievances in the country of 48 million people.
Meanwhile President Uhuru vowed to be the leader of all Kenyans and work to unite the country after a bruising and drawn out election process that ended with his swearing-in.


“I will devote my time and energy to build bridges, to unite and bring prosperity,” he said — a promise likely to ring hollow for the opposition, which rejects his election outright.
The message is sorely needed in Kenya, as the more than four-month period of political upheaval has left the nation more divided than ever.