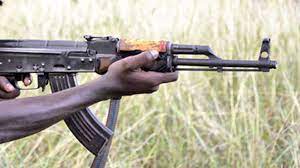 Police at Nsangi is holding one of their own on allegations of killing his fiancée following a misunderstanding.
The territorial police are investigating a murder by shooting of Sarah Nabukenya, a teacher at Buddo Preparatory School, and an attempted murder of Mark Busulwa.


It is alleged that yesterday at about 2200hrs, Corporal Sam Ewuku went to visit Nabukenya, who is believed to have been the girlfriend, only to turn his rifle against her. He shot her dead.

He later turned the gun to a passerby Busulwa and injured him on the hand. The case was reported at Buddo Junior Police Post that later involved Kampala Metropolitan South to have him arrested.

Luke Owoyesigyire, the deputy Kampala Metropolitan police spokesperson, says that Owuku was preparing to flee when he was arrested. He says that the suspect had also abandoned the vehicle and the gun he used to kill Nabukenya. Police recovered 13 bullet casings at the crime scene to help with the investigations


Owoyesigyire says The body of the deceased person was conveyed to city mortuary. The injured person is still responding positively to treatment.