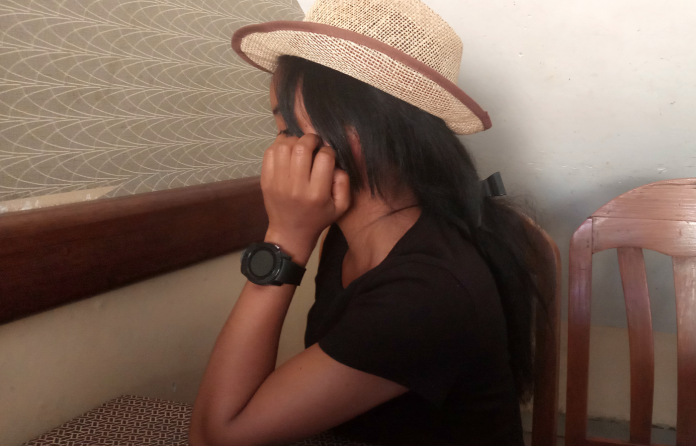 It’s a Monday afternoon. I’m working at my office in The Hague when a young woman’s plea for sanctuary reaches me via Facebook Messenger.
“Good evening Madam,” it begins. “I want to know the address for the shelter in Kuwait… Please, I need your help.”
The woman introduces herself as Eline. She is originally from Madagascar, one of the poorest countries in the world. She does not use her real name on her Facebook account; instead, she goes by the name Hasina.

Eline’s contacted me because of an article I wrote four years ago for Al-Jazeera about a shelter for “runaway maids” in Kuwait. She’s even included a screenshot as a reminder.
Kuwait is one of the world’s richest countries and almost everyone employs one or more domestic workers. Some 70 percent of the residents in this small Gulf emirate are migrants: out of around 2.5 million foreigners, there are 648,346 mostly Asian and African domestic workers, employed inside family homes as cleaners, cooks, child carers, elderly caregivers, drivers or gardeners..


In the Gulf region, migrants are bound to their employer via the kafala or sponsorship system. Passports are taken away on arrival and the contract can only end when the employer agrees.
In 2015, Kuwait adopted a law on Employment of Domestic Workers. The maximum number of work hours is set at 12 hours a day with the right to a weekly rest day and yearly paid leave.
In reality, few domestic workers have benefited from these rights.
There is also contempt in Kuwaiti society for migrant workers. Last year Sondos Alqattan, a beauty blogger, provoked anger when she said she was opposed to servants getting a day off and keeping their own passports.


The Kuwait Society For Human Rights said in a report that the Domestic Workers Department, which is supposed to handle complaints by domestic workers against their employers, has admitted it cannot impose penalties on employers for violations.
“All it can do is prohibit employers from recruiting workers for six months,” says the report.
The dream of scape
Eline says a friend put her in touch with an illegal job agency in Madagascar, which in turn connects her with an agency in Kuwait run by a Bangladeshi man. She finally secures a job as a domestic worker in Kuwait in 2016.
Over recent years, several stories have appeared in the media about domestic help being treated badly in Kuwait and other Arab countries.


Arriving in Kuwait in August 2016, Eline cooked and cleaned for a Saudi family of more than 30; four generations in a large two-storey house in the Kuwaiti suburb of al-Andalous.
“They called me servant and would scream orders at me in harsh voices, even the children,” she says.
Eline had to face the unwanted attention of one of the sons of her employer – and physical abuse. “One of the four sons sometimes tried to touch me when nobody watched. And when my boss discovered I owned a phone, he hit me.”
The “agency” in Madagascar had promised Eline $278 a month, an eight-hour workday and one day off a week. Instead, she received $167 a month and had to work more than 16 hours a day – 6am to midnight, seven days a week.
According to the Kuwait Society for Human Rights, 56 percent of domestic workers never get a day off, while 22 percent only do so occasionally. Ninety-two percent of employers confiscate their workers’ passports despite it being illegal.


The minimum wage for domestic help is set at 60 Kuwaiti dinar ($197) a month. Kuwaitis themselves earn an average of 17 times that. How much the workers earn depends on their nationality: Asian, and especially Filipino domestic staff make more than those from Africa.
Beyond the numbers, Eline’s experience is common for domestic workers in Kuwait, with many reports of abuse in the media. In 2017, an Ethiopian woman was filmed jumping from the seventh floor to escape her boss.
Last year, Joanna Demafelis from the Philippines was found dead in a freezer, sparking diplomatic tensions with Manila over the treatment of its citizens; her employers were later sentenced to death for her murder.
Such cases have not come to an end. In May this year, Constancia Dayag from the Philippines was allegedly sexually assaulted and killed in Kuwait.


How to escape?
A few months before her two-year contract ended, Eline informed the family she would be going home. They were furious and insisted she had to stay for five years. She notified her “agency” in Kuwait she wanted to leave but was told to stay. Eline also emailed her embassy in Saudi Arabia, but received no answer.
So Eline came to me.
After much toing and froing, Eline manages to track down a contact. Eline thought about waiting for her next salary and then fleeing. I suggest she instead go immediately and ask my Kuwaiti friends to collect her, yet most were reluctant or not around.
Then Eline hatches her own plan: she and the babysitter will flee when they put out the rubbish, the only time they are allowed to leave the house.


The pair jump in a taxi – despite having no money – but instead of bringing them to the shelter, the taxi driver takes them to another house where the family wants to employ them.
I advise her against staying there, especially given she does not have her passport.
A friend of mine and his father’s driver agree to collect Eline and bring her to the shelter.
The problem of abuse of migrant workers in Kuwait is so bad that foreign embassies – including India, Sri Lanka and the Philippines – run makeshift shelters for workers who have fled.
Outside the shelter, Eline comes across some women from home. She texts me on WhatsApp: “Im here now , waiting outside for manager .
In total, she says, there are 14 African women sitting at the door, waiting for the manager to let them in. Some say they have been waiting for a week. It’s cold, they‘re hungry and need to use the bathroom. “We hope someone can take us inside the house tonight,” she texts. “Bcoz very cold to sleep outside.”


The next morning, after the door opens, Eline and the other women undergo pregnancy and medical tests. She has no credit on her phone to make calls but has some internet credit to send emails, Facebook and Whatsapp messages. Eline asks me to contact the Madagascar Embassy in Saudi Arabia, but I get no response to my emails.
In the shelter – and no way out
In the shelter time passes slowly. There is nothing to do, Eline says, “just eating and sleeping.”
“On Fridays, a group of Christians come to pray with us. They also bring toothpaste, soap and sanitary towels.”
“Good news!” she exclaims on a WhatsApp video a few days later. Two women from Human Rights Watch have visited, and she now hopes to return home soon.


The researchers later tell me they are working on a report about domestic workers in Kuwait. HRW’s women’s rights researcher for the Middle East and North Africa, Rothna Begum, says that some of the women she interviews say they have been beaten, sexually assaulted or raped by employers
“It’s a minority, but probably not everyone wants to talk about it.” Not all women whose rights are violated reach the shelter, says Begum, because not everyone knows they exist and not everyone can escape.
Eline hears more stories of abuse. A Malagasy woman who also sleeps in Eline’s room says she was forced to work from six in the morning until 3am the following day. Her employer only gave her bread to eat and no salary for half a year. When his wife went to Saudi Arabia, the husband raped her.


The president calls
By late January, Eline is starting to become impatient. She sends an email to the Madagascar embassy with the names and birth dates of the Malagasy women at the shelter, but receives no reply. I also follow up with an email. No luck still.
Then, on 1 March, Eline makes a film with her phone from inside the shelter, asking for help, and puts it on Facebook.


Within an hour, it is shared hundreds of times back in Madagascar. That night it is shown on the national Malagasy TV channel TVM. Shortly afterwards, the Malagasy president, Andry Rajoelina, calls the women via Facebook to hear about their situation.


Back home, wiser
Finally, in late April, three months after fleeing her employer, Eline is able to fly home to Madagascar and then on to her home village to stay with her parents.
‘There is little work, and even if you have a job as a teacher or a police officer, you earn less than a maid in Kuwait’
Two months after her return, she tells me on Facebook she has moved to Madagascar’s third city, Antsirabe: “Next month, I will build my own house and maybe next school year, I will start a training, so I can teach in a pre-school.”


Eline knew about the stories of domestic workers being treated badly in Arab countries before she left to work in the Middle East; yet she and other women continue to take the risk to escape poverty.
“There is little work [here],” says Eline, “and even if you have a job as a teacher or a police officer, you earn less than a maid in Kuwait.”
But after all she has been through, her advice for those tempted to go and work in the Gulf is clear: “Don’t go, life is hard there, but anyway the choice is yours.”