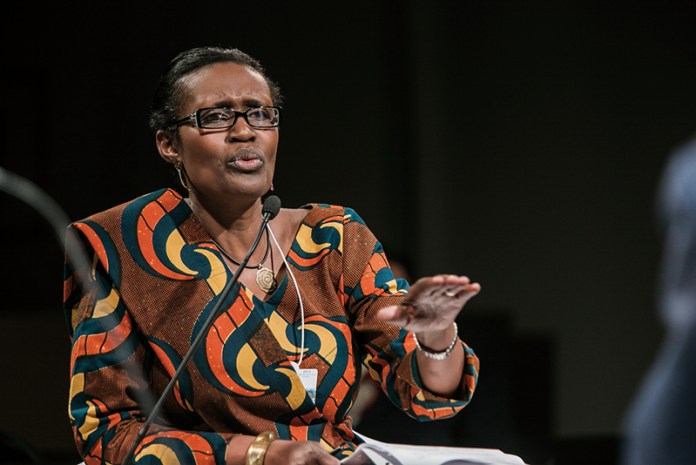 
Oxfam’s Board of Supervisors on Monday handed Winnie Byanyima a second five-year term as Oxfam International’s Executive Director.
Winnie joined Oxfam in 2013 from the United Nations having previously served in the Ugandan Parliament for 11 years and in the African Union Commission.


Oxfam Chair Juan Alberto Fuentes said: “We are thrilled. Winnie is a visionary leader in the fight against inequality and poverty, and an inspiration to our teams and partners around the world. We look forward to continue to work with her to help create lasting solutions to the injustice of poverty.”
Winnie said she was honored and humbled by the Board’s confidence in her continuing an “exciting, roller-coaster journey” and felt a sense of duty to “carry on fighting, particularly for the women and girls in the South facing poverty and injustice” with whom Oxfam works.


In her first term, Winnie initiated the “One Oxfam” restructure that enables Oxfam to be a more globally balanced organization with a stronger voice in the South, and transforms decision-making so it is happening more directly from Oxfam’s country teams. Oxfam has welcomed new affiliates in Brazil and South Africa and a new observer member in Turkey. She recently moved the Oxfam International HQ to Kenya. “This is vital to our mission as we must influence change from a position of integrity,” she said.


Winnie said in the next five years she was eager to expand and deepen Oxfam’s work in advancing women’s rights and “tilt the balance” of Oxfam’s humanitarian work toward prevention, such as building up people’s resilience to the ever increasing and more intense crises.


She said she would push Oxfam to become much more ambitious in its understanding and use of the vast knowledge base of its staff, partners and volunteers around the world, saying “our knowledge is our power to change the world.”

She was excited about seeing through investments Oxfam is making in new, agile technologies. And she promised to push through her vision to trust the future of Oxfam more in the hands of young people in the South who are “the architects of our economies and our societies of the future.”