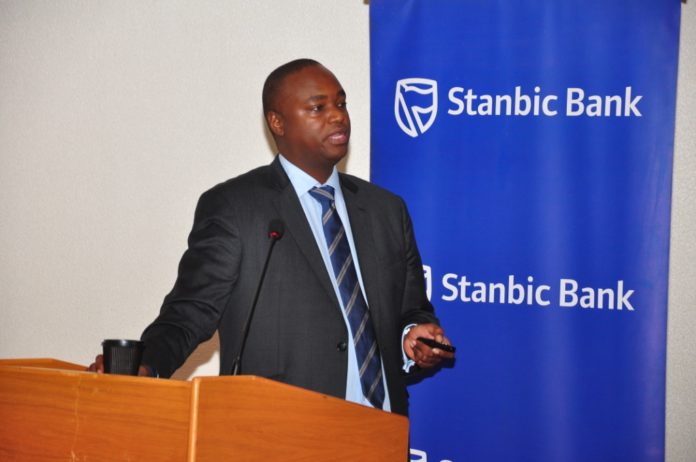 By Andrew Muhimbise
Stanbic Bank Uganda as expected posted stellar results in 2016 Financial Year, reporting record figures for the second year in succession.
Revenue hit Ugx. 643 billion, while net profit tax jumped to Ugx 191 billion representing a growth of 21% from 2015 and 27% respectively. Total Deposits were above Ugx. 03 trillion up by 25%
Bravo to Mr. Patrick Mweheire, the Chief Executive officer and the entire team at stanbic Bank Uganda.


READ: Stanbic Bank CEO pockets one billion after 2016 bumper harvest
But, there is one paradox, the minority shareholders benefit! paying a dividend of 1.1/= per share for end of 2016 from highs of 1.66/= for 2014 ironically where the profit was much less.
How it plays out
As the employee’s numbers reduce their total pay package and bonuses sky rocket, the Board allowances are at an all-time high compared to other banks and firms on the Uganda Stock Exchange.


Stanbic Bank Uganda board members earn up-to $5,000 (about 18m) per sitting on top of a monthly retainer fee, the chairman earns in excess of Ugx. 100m a year for a just four meetings. On average other board members earn average of $ 2,000. Stanbic Bank board is also entitled to bonus pay tagged to performance. After bumper 2016, the directors are expected to smile all the way to the bank.

Never mind major decisions are taken at executive level in South Africa or Nairobi, the regional headquarter. Taken together board members in Uganda are people of substance who play mostly an oversight role devoid of strategy. Bank of Uganda regulations requires foreign companies to have Ugandans on their body.


The bank has eight board of directors lead by Japheth Katto, -Board Chairman. The other directors are: Kevin Wingfield, Ruth Emunu, Barbara Mulwana, Dr. Samuel Sejjaaka, Dr. Patrick Mangheni, Greg Brackenridge and Eva Kavuma
Profit repatriation
The South African based Standard bank has lee way to purchase anything from herself or her related companies at self-determined prices.
A case in point in 2016, we forked out Ugx. 83 billion, compared to the Ugx. 191 billion net profit, for computer software to serve 600,000 bank clients!


Multinationals, Stanbic Bank inclusive prefer to buy as a group which is practical. However, the same convenience is abused where they trade amongst one another without arm’s length. It’s the modern way of profit repatriation and that’s why of late URA has boosted her international tax desk with emphasis on transfer pricing
Ugandan shareholder earn peanuts
The stanbic bank Uganda share price will at best remain stagnant as the Board and Management is renegading on its core role of delivering real value to all the shareholders and not just the 80% holder.

The 2015 steep drop in dividend ironically the lowest in the past ten years, was based on the Central Bank of Uganda requiring more capital and reserving funds to purchase computer software for the bank.
These two factors were exhausted from the 2015 retention, but still the dividend has stubbornly remained below the known average dividend pay-out of 52% of net profit from the year of listing in 2006 to 2012 with a high of 78% in 2006 immediately after listing.
In 2013 the dividend pay-out was 49%, then 62% for 2014, then 26% for 2015 and 31% for the year under review.
It is clear The Board, Management and by extension the majority shareholder in South Africa have conspired to shelter their nests in bonuses, perks, transfer pricing mechanisms (profit repatriation) leaving the more than 22,000 Ugandan shareholders in a catch 22 of low dividend combined with a stagnantly lowering stock price in the midst of record financial performance, absurd!