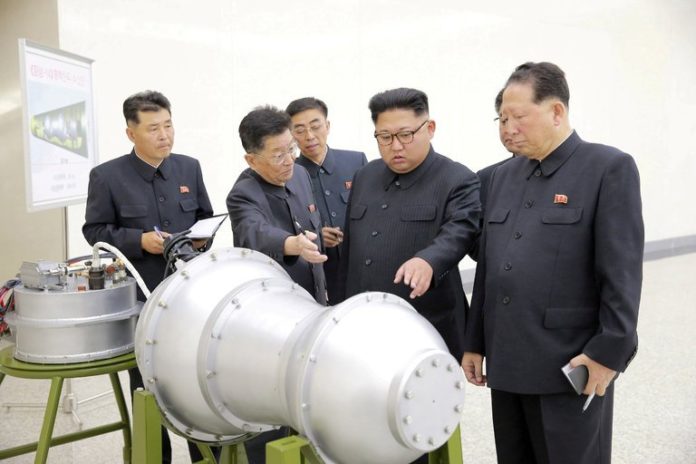 
The missile was fired from Pyongsong, a city in South Pyongan Province, at around 3:17am local time (18:17 GMT) on Wednesday, according to South Korea’s military.
Japanese Defence Minister Itsunori Onodera said the missile reached an estimated altitude of around 4,000 kilometres and broke up before landing in the country’s “exclusive economic zone”.
His US counterpart, James Mattis, said the missile went higher than ever before, describing it as a step towards Pyongyang building missiles that can “threaten everywhere in the world, basically”.

“With these tests, North Korea wants to demonstrate to the world the range its missiles have,” Al Jazeera’s Kathy Novak, reporting from South Korea’s capital, Seoul, said.
An initial assessment by the US Department of Defense said North Korea fired an intercontinental ballistic missile (ICBM). This type of missile is capable of carrying nuclear warheads and could reach the mainland of the United States.
If the Pentagon’s first assessment turns out to be correct, it would be the third test of an ICBM by North Korea this year.


Following the launch, South Korean President Moon Jae-in was expected to preside a national security meeting with top advisers, while Japanese Prime Minister Shinzo Abe called for an emergency meeting of the UN Security Council.
“This is being taken very seriously here in the region,” said Al Jazeera’s Novak, noting that South Korea conducted a live-fire drill five minutes after the firing of the missile.


2The message that the South wants to send to the North is that it is monitoring actions coming out of North Korea; that it detects these missile launches quickly; and that it is prepared to respond,” she added.
Commenting on the launch, US President Donald Trump said “it is a situation we will handle”, adding that the US stance on the North Korea issue would not change.
……. aljazeera