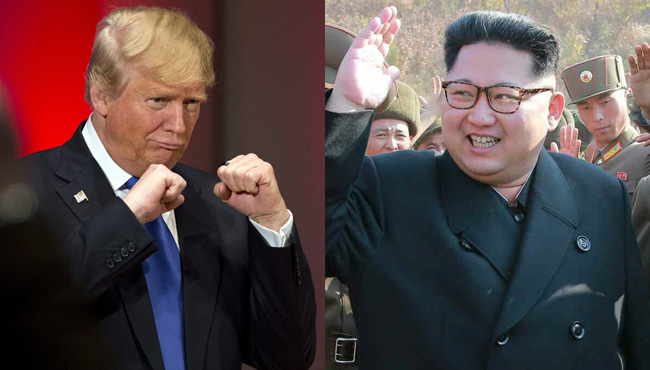 North Korea dismissed on Thursday warnings by U.S. President Donald Trump that it would face “fire and fury” if it threatened the United States as a “load of nonsense”, and outlined detailed plans for a missile strike near the Pacific territory of Guam.
North Korea’s apparently rapid progress in developing nuclear weapons and missiles capable of reaching the U.S. mainland has fuelled tensions that erupted into a war of words between Washington and Pyongyang this week, unnerving regional powers and global investors.


Trump’s unexpected remarks prompted North Korea to say on Thursday it was finalising plans to fire four intermediate-range missiles over Japan to land 30-40 km (18-25 miles) from Guam, more than 3,000 km (2,000 miles) to the south.
Guam is home to about 163,000 people and a U.S. military base that includes a submarine squadron, an air base and a Coast Guard group.
“Sound dialogue is not possible with such a guy bereft of reason and only absolute force can work on him,” a report by the North’s state-run KCNA news agency said of Trump.

The army will complete its plans in mid-August, ready for North Korean leader Kim Jong Un’s order, KCNA reported, citing General Kim Rak Gyom, commander of the Strategic Force of the Korean People’s Army.
While North Korea regularly threatens to destroy the United States and its allies, the report was unusual in its detail.
Masao Okonogi, professor emeritus at Japan’s Keio University, said the North Korean reports suggested Pyongyang was issuing a warning or advance notice of changes to its missile testing programme rather than threatening an attack.
“I believe this is a message saying they plan to move missile tests from the Sea of Japan to areas around Guam,” he told Reuters. “By making this advance notice, they are also sending a tacit message that what they are going to do is not a actual attack.”


BOASTS ABOUT POWER
The United States and South Korea remain technically still at war with North Korea after the 1950-53 Korean conflict ended with a truce, not a peace treaty.
U.S. Defence Secretary Jim Mattis issued a stark warning earlier on Wednesday, telling Pyongyang the United States and its allies would win any arms race or conflict.
“The DPRK should cease any consideration of actions that would lead to the end of its regime and the destruction of its people,” Mattis said in a statement, using the acronym for North Korea’s official name, the Democratic People’s Republic of Korea.


Tension in the region has risen since North Korea carried out two nuclear bomb tests last year and two intercontinental ballistic missile tests in July. Trump has said he will not allow Pyongyang to develop a nuclear weapon capable of hitting the United States.

On Wednesday, Trump boasted about U.S. nuclear capabilities.
“My first order as President was to renovate and modernize our nuclear arsenal. It is now far stronger and more powerful than ever before,” Trump said on Twitter. “Hopefully we will never have to use this power, but there will never be a time that we are not the most powerful nation in the world!”


U.S. Secretary of State Rex Tillerson, who was in Guam on a previously scheduled visit, played down the rhetoric, saying he did not believe there was an imminent threat from North Korea and “Americans should sleep well at night”.
Earlier on Wednesday, Guam Governor Eddie Calvo dismissed the threat and said the island was prepared for “any eventuality” with strategically placed defences. He said he had been in touch with the White House and there was no change in the threat level.
HEADING TOWARDS CONFRONTATION
North Korea accuses the Washington of devising a “preventive war” and has said any plans to execute this would be met with an “all-out war, wiping out all the strongholds of enemies, including the U.S. mainland”.


Washington has warned it is ready to use force if needed to stop North Korea’s ballistic missile and nuclear programmes but that it prefers global diplomatic action, including sanctions. The U.N. Security Council unanimously imposed new sanctions on North Korea on Saturday.
China, North Korea’s main ally, has consistently urged both sides to work to lower tensions.
Influential Chinese state-run tabloid the Global Times said the North Korean nuclear issue was heading towards confrontation and it was time for the United States to respond to Pyongyang’s security concerns.


“North Korea has almost been completely isolated by the outside world. Under such extreme circumstances, Pyongyang will weigh all its possible options,” it said in an editorial on its website on Thursday. “Washington should stimulate Pyongyang’s desire to engage with the outside world and return to the international community.”
A senior U.S. official who deals with the Korea issue said the “fire and fury” comment, which was Trump’s strongest warning yet for North Korea, was “unplanned and spontaneous”.


“There had not been any discussions about escalating the rhetoric in response to Kim’s statements or about the possible effects of doing that,” the official said.
However, White House spokeswoman Sarah Sanders told reporters national security officials had been aware of the tone of Trump’s message before he gave it.
“The words were his own. The tone and strength of the message were discussed beforehand,” Sanders said.
Source: Reuters

Projects worth $140m on the table to boost vaccines & healthcare...