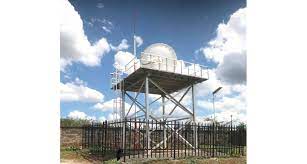 The recently released Hydromet Gap Report highlighted weaknesses in Africa’s weather and climate observation systems that contribute to a lack of climate data and inadequate early warning systems. The report calls for the establishment of ground and upper air stations for basic observation and satellite data coverage to strengthen forecast and early warning mechanisms for extreme weather events.
Some advances have been made. As a result of African Development Bank support, Africa now has direct access to satellite data to produce forecasts and prediction models that are more responsive to natural and climate disasters.
Under the Satellite and Weather Information for Disaster Resilience in Africa (SAWIDRA) program, the Bank provided €20 million for the installation of four regional advanced retransmission service (RARS) stations in Gabon, Niger, Kenya, and South Africa. The stations provide hydro meteorologists high-resolution satellite data that can be readily assimilated into computer models to enable early warnings.


“The RARS stations download observational data directly from several meteorological satellites from Europe, USA, and China when they orbit over Africa,” said Vincent Gabaglo (EUMETSAT), SAWIDRA’s Technical Facilitator. “Our cooperation with the African Development Bank focuses on ensuring that the African meteorological community has capacities to access the satellite data directly and process them so that they can answer the needs of their users.”
Since 2016, the Bank has supported SAWIDRA by investing in the establishment of the African Centre of Meteorological Application for Development (ACMAD) as well as the four regional climate centers.
The project has equipped ACMAD with supercomputers that are helping to monitor locust invasion – which can contain up to 150 million locusts per square kilometer and travel 100 to 150 kilometers a day, consuming crops sufficient to feed 35,000 people.
The Bank has also helped develop ACMAD’s capacity to provide prediction outputs and guidance to the climate centers and the National Meteorological and Hydrological Service (NMHS) for farmers and local communities.
“The SAWIDRA program has helped farmers make informed decisions on optimal planting times,” said Dr. Andre Kamga, Director General of the African Center of Meteorological Applications for Development.

Dr. Abubakr Babiker, a climate information expert with the East Africa region center, noted that the Kenya RARS station has been gathering high-resolution satellite data to improve severe weather forecasts. “These forecasts are increasingly being used by various sectors, including agriculture, water, disaster risk management, conflict, and health as well as communities for contingency planning and resilience building,” he said.
SAWIDRA laid the ground for the recent launch of the state-of-the-art East Africa Hazards Watch System(link is external), said Dr. Babiker. This is an interactive, web-based, color-coded multi-hazards warning system that facilitates decision-making and early action that support resilience against severe weather and climate events.
By advancing the development of prediction models that are best suited to Africa’s weather systems, the SAWIDRA program has transformed hydrometeorological service delivery on the continent.


The Bank has been extending financing to the SAWIDRA program and other innovative programs to improve access to quality climate data through the Climate for Development Africa Special Fund (CDSF). This multi-donor trust fund supports African countries, institutions and communities to build resilience to the impacts of climate change.