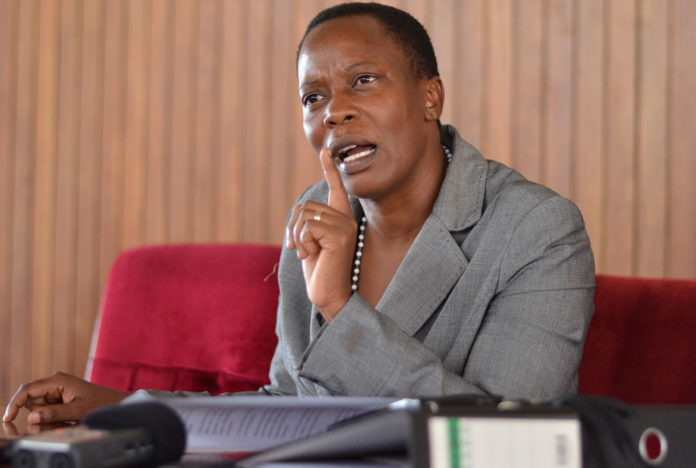 Mukono Municipality Member of Parliament Betty Bakireke Nambooze has asked the defeated Forum for Democratic Party President – Gen. Mugisha Muntu to quit the party if he feels he was cheated or sidelined.


Nambooze belongs to the Democratic Party DP.
‘‘Trying to settle in and catch up with the politics in the country… I get to wonder what type of democrats Uganda might be raising… So if Mugisha Muntu loses an election in which no rigging is cited then he is advised to leave FDC!! What would be the purpose of elections when we don’t expect them to deliver changes.’’Nambooze posted on her Facebook page.

She added: Any democrat would be congratulating FDC for this achievement and that is what I wish to do right away, at least in FDC members, have the opportunity of witnessing a peaceful handover of power. Cong’s colour blue, may you infect DP and Uganda with this wonderful vice.
Early this monthly, social media was awash with reports claiming that Dr. Kizza Besigye reportedly met MP Nambooze’s medical bills in India where she successfully underwent spinal cord surgery. Reports further claim that the Mukono municipality legislator risked missing the crucial surgery had Dr. Kizza Besigye not offered to help


Gen Muntu lost to Eng Amuriat 641 to 505votes. He was defeated at all the six polling stations at Namboole national stadium. the elections were held on friday at Nambole stadium.
In the middle of his open campaign at Nambole , Gen Muntu questioned Dr Besigye’s democratic credentials.
“I am glad Dr Besigye you are seated here,” a highly charged Gen Muntu said, as he faced a stony Dr Besigye. “In 2009, we competed together. I lost and went behind you without question. In 2010, we competed for flag bearer. You won. I went behind you without question. I did not question you in 2015. ‘’


He went on: I saw your heart in your throat. You were fearful. You did not know what was going to happen. Do you remember what I said when I stood on the platform? I am a democrat. I respected your choices. Don’t put feelings or interests in politics,” Gen Muntu told Dr Besigye, as the delegates clapped and shouted.
Muntu is expected to hold a press conference tomorrow at Hotel African, he is expected to announce his next move after losing the FDC party elections.

read: Muntu loses to Amuriat, -ponders leaving the party that thinks he is an NRM mole