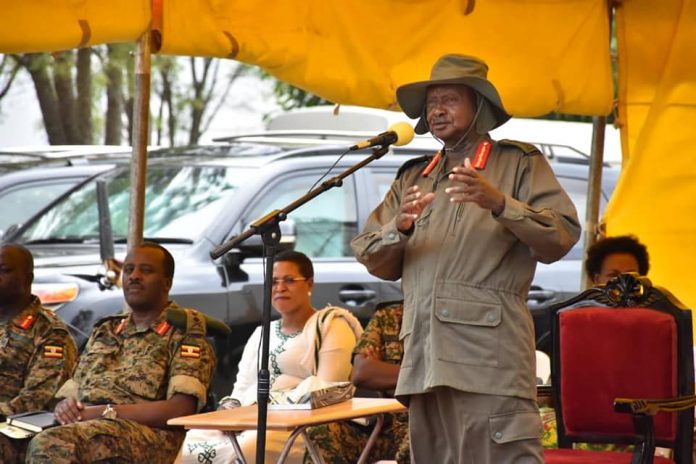 President Museveni has promised to establish a primary and a secondary school in every UPDF barracks in the country to enable children of soldier’s access free education.


He said plans are also under way to establish a UPDF science-based university to provide university education to the soldiers’ children.
The president he proposed university will teach science courses, such as engineering, medicine, nursing and midwifery. Other courses such as Bachelor of Business Administration, Accounting and Political Science, will also be included.

The Head of State, made the revelation on Wednesday while interfacing with Officers and men of Masindi Field Artillery Division in Masindi district in Bunyoro Sub-Region.
On health, Gen. Museveni pledged to address the sector in the Army to enable children of soldiers to benefit and access good health facilities. He, however, reminded soldiers to be guards of their own lives as regards health by living responsibly.


“In order for us to achieve our aims, we should preserve our health against bad behaviours. Since I came into power in 1986, you will never hear that Museveni has fallen sick or is admitted in hospital because I care about my health,” he counseled.


He pledged Shs. 100 million towards the Masindi Field Artillery Division soldiers’ spouses’ Savings and Credit Cooperative Organization (SACCO); saying he was impressed to learn that the spouses were engaged in a number of income generating activities like poultry, piggery and mushroom growing from where they are raising money to supplement family incomes.