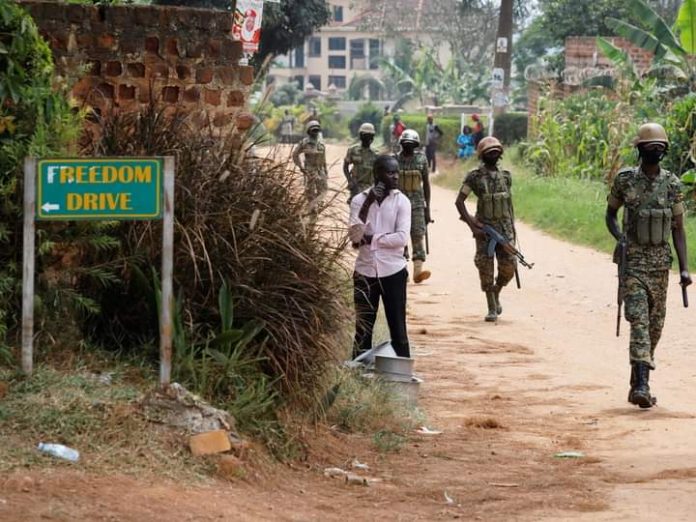 Uganda police and Uganda People’s Defence Forces on Monday deployed heavily around Bobi Wine’s home in Magere, Wakiso District and National Unity Platform headquarters in Kamwokya
Addressing journalists at the police headquarters in Naguru, UPDF deputy spokesperson Col. Deo Akiiki said they accord security to individuals based on their weight and prominence in society and Kyagulanyi is no doubt a distinguished Ugandan.

In a statement police, police said they are aware of aware of plans by Former Presidential Candidate, to hold a parallel and illegitimate swearing-in ceremony, in one of the Hotels in Iganga.
‘‘The Candidate continues together with some of his supporters to declare himself as the President-Elect. We want to remind him and his supporters that the voices of the electorate were clearly heard. He is therefore, not the legitimate or duly Elected President of the People of Uganda. As a potential leader, we urge him to play his politics with full respect for the rule of law.’’ The statement signed by Police Spokesperson Fred Enanga reads In part.


it adds: any judicial officer, organiser and or media house that will participate in covering the illegitimate parallel swearing-in in Iganga or any other place, should prepare to face the consequences. Such acts of impunity must stop in exchange for rule of law. It is illegal and treasonous.

Police has warned of traffic interruption and heightened security in Kampala ahead of President Museveni’s inauguration ceremony for his sixth five-year elective term at Kololo Independence Grounds on Wednesday.
“There will be traffic disruption along Entebbe Road and in most of the routes leading to Kololo Ceremonial Grounds,” traffic commander for Kampala Metropolitan police, SSP Norman Musinga, has said.
According to him, the John Babiiha Avenue which stretches from City Oil in Kamwokya along Kira Road up to Fairway traffic lights along Yusuf Lule road will be out of use.


Very Important Persons will be the only ones to utilize the John Babiiha Avenue to heroes’ corner at Kololo airstrip. VIP cars will use Mabua road, join John Babiiha road, Golf Course road and park at Hotel Africana after dropping the high class guests.
Wampewo Avenue will strictly be a one way route in the morning as people head to the inauguration venue and after the ceremony. According to Police, service providers such as media, emergency cars, ambulances, security vehicles will access Kololo via Wampewo Avenue and occupants will be dropped at the lower gate.