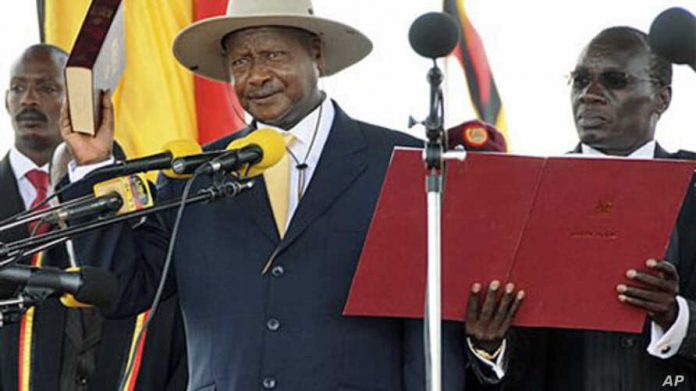 Uganda Police has tightened security ahead of the swearing-in of the President-elect, H.E. Yoweri Tibuhaburwa Museveni.
The ceremony will be held on the 12 May 2021, at the Kololo Independence Grounds. The ceremony marks the climax of the Presidential Election.
Police spokesperson Fred Enanga says the Joint Task Force has been mandated to ensure the pre-swearing, swearing-in and post events, and take place in a very safe and secure manner.
‘ ‘ We are therefore, confident of holding a successful event since it was planned for in the security master plan for policing the 2021 general elections, with contingencies and counter- response plans, against any threats and vulnerabilities.’’


He adds: At this stage, we want to inform the public that there are no specific threats directed towards the swearing in ceremony, although, we anticipate disruptive activities, such as the use of petrol bombs, acts of sabotage, blocking roads, burning tyres and other disruptive activities.
‘ ‘However, our Joint Intelligence Components have picked this piece of information, and continue to gather information surrounding the would be perpetrators. We also are monitoring some of the disgruntled supporters who continue with their usual rhetoric of threats to violence. But we have since established that most of their threats do not pose any serious risk of violence.’’
Mr. Enanga however says Joint Operation Command Centres across the country, are fully alert, with the relevant intel, operative and investigative components; operating 24/7.

‘ ‘ They are closely monitoring a wide-range of potential threats especially acts of domestic extremism, external influence , radical behaviour and closely monitoring all our border areas and crossing points, especially in West Nile region. ‘’
Addressing journalists at Naguru Police headquarters, Last week, UPDF spokesperson, Brig Flavia Byekwaso said they have got “credible information” about a section of Ugandans planning to disrupt the swearing in ceremony of the elected president Yoweri Kaguta Museveni.

“I would like to bring to your attention the continued hate speech by a section of individuals through help of foreigners; they think they can stop the swearing-in of President Museveni,” said Byekwaso”.

She revealed that security agencies have confiscated posters to be used in the protests with words of hate speech that incite violence to the members of public.


“The Posters circulating in the city have words like “Tajja Kulayila Nomuganda Afugeko”, “Nga 1st May, Kusiiba Tugobe Abahiima”, Byekwaso said. She, however, warned that anyone planning this will be dealt with accordingly.

Asked whether security has yet made any arrests, the army spokesperson said whereas no one has been arrested, they are closely following up leads and that soon they will take action.