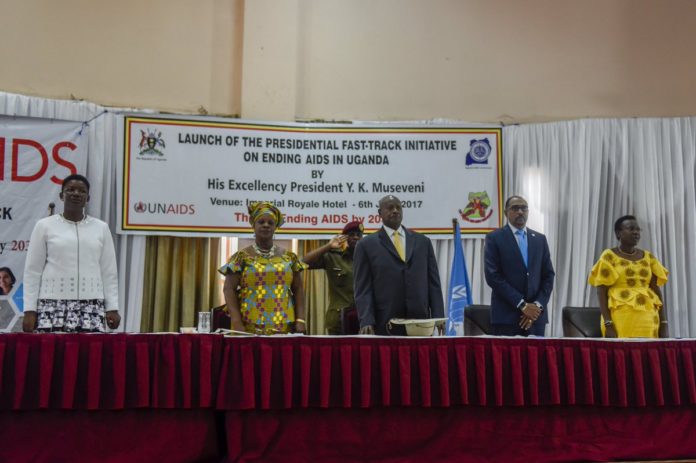 The President Museveni has launched the Presidential Fast-track Initiative on ending HIV and AIDS under the theme “Ending AIDS by 2030”. This initiative was launched with main focus on voluntary testing for men.
“I urge all men to go for voluntary testing and if you are positive, take your drugs consistently. They will not cure you but when the virus is suppressed, your life is prolonged and you will not infect others” President Museveni stressed during the launch.


The Presidential Fast-track Initiative was launched against the background the Uganda has made tremendous efforts in the fight against HIV with new infections dropping from 135,000 in 2010 to 60,000 in 2016, new HIV infections among children have dropped from 26,000 in 2010 to 3,000 in 2016 while the annual AIDS related deaths have reduced from 100,000 in 2004 to 28,000 in 2016.
It is therefore against this backdrop that ‘The 5 Point Plan’ was launched and this requires the following:
Engage men in HIV prevention and close the tap on new infections particularly among adolescent girls and young women
Accelerate the implementation of Test and Treat and attainment of 90-90-90 targets particularly among men and young people

Consolidate progress on eliminating mother-to-child transmission of HIV. Ensure financial sustainability for the HIV response. Ensure institutional effectiveness for a well-coordinated multi-sectoral response
President Museveni attributed Uganda’s progress in the fight against HIV to; scaled up HV prevention, treatment based on combination HIV prevention including structural, behavioural and biomedical interventions. Core interventions included behaviour change communication through Abstinence, Faithfulness and Condom Use (ABC), Safe Male Circumcision, HIV counselling and testing, Elimination of Mother to Child Transmission (EMTCT), and Care and treatment.
“Despite these achievements, we still have challenges such as low male involvement in HIV programs including significantly low uptake of HIV services, high levels of new HIV infections among adolescent girls and young women” Museveni noted. This continues to negatively impact the realization of Uganda’s Vision 2040 of becoming a transformed society from a peasant to a modern and prosperous country.


Museveni reiterated the need for Ugandans to embrace good Primary Health Care such as nutrition, good hygiene, safe water, sleeping under a mosquito net to prevent Malaria in order to have a healthy and disease free nation.
The Minister of Health, Hon. Dr. Jane Ruth Aceng said that the impact assessment records indicate that an estimated 1.4 million people are living with HIV. “We face severe challenges among men- Men do not want to engage in HIV prevention and treatment programs. Currently, only 60% of men go for testing while 52% take ARVs” she noted. In the same vein, Hon. Aceng added that Uganda has lost almost 14,000 men to HIV/AIDS.
The launch took place at Imperial Royale Hotel in Kampala under the theme ‘Ending AIDS by 2030’ 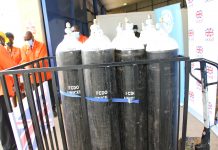