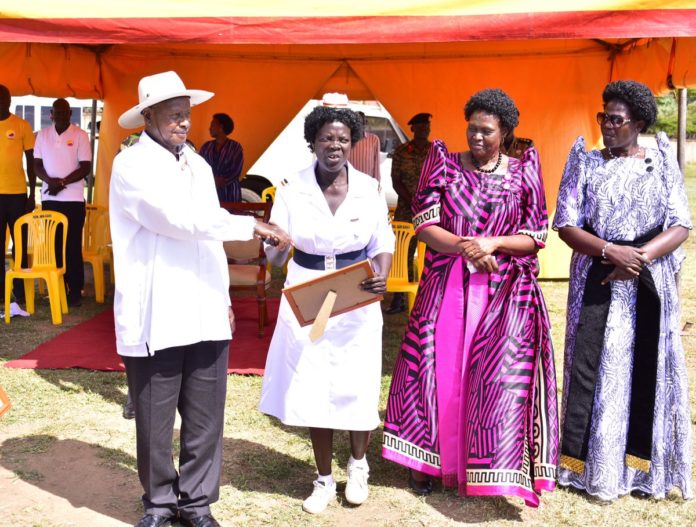 President Museveni presided over the International Nurses Day celebrations at Boma Grounds in Kitgum Municipality, under the theme: “Nurses: A voice to lead. Health is a human right”.
‘ ‘I thank the nurses for mounting the guard of honour that ushered me here. I was pleasantly surprised. Usually it is the soldiers who do that. Thank you. I thank the nurses for being good Christians and rejecting calls to join strikes of those fighting for salary increments.’’ He said.


The president said that he has insisted that scientists, including nurses, must have their salaries enhanced in the next budget. This , he said will be done gradually until we match regional standards.
The president revealed that NRM government has devoted a significant portion of government revenue to infrastructure development, that is why goverment are handling the issue of salary gradually.

The president said that the complaint by nurses regarding workman compensation is valid and I will study it. But you are entitled to it. ‘ ‘There should be no debate.’’
He added: I am happy to learn that nurses have formed a SACCO. This will help you earn extra income, and I am going to support it. I have also directed my office to address the issue of the land title for your office at Mulago. The government will address the issue of housing for nurses because I support the idea that you should reside near your work places. We shall build houses close to hospitals.


On the issue of equipping hospitals with necessary equipment, the Mr. Museveni said government is going to enter into a partnership with General Electric, an American company that we are dealing with in the oil sector. It also manufactures medical equipment and will supply these at a lower cost.