Home Politics Museveni passes out 4,325 recruits; the new soldiers are a number of... 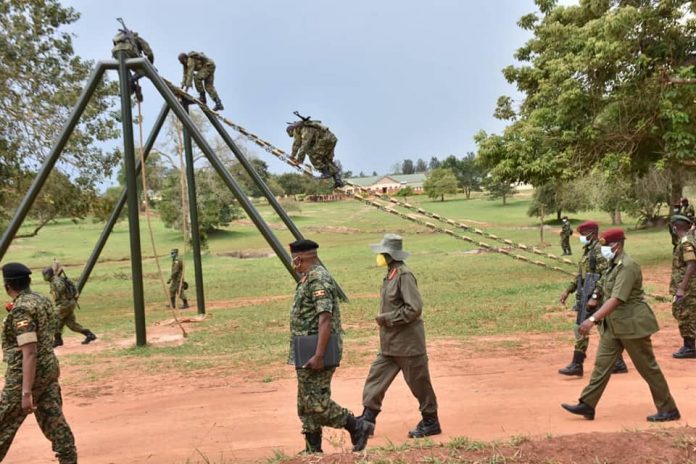 
President Yoweri Museveni has passed out 4325 recruits who successfully completed their basic military training at Recruits Training School (RTS), Kaweweta, Nakaseke District.
They include 636 female soldiers, the largest number ever recorded in a single intake.
In his address, the Commander-in-Chief congratulated the new soldiers upon successfully completing their training and advised them to live responsible lives.


“Remember life is very important and your health too. Please don’t spoil your lives with alcohol and promiscuity,” said Gen Museveni, adding that with self-discipline, they can go very far in the Army.
The Commander-In-Chief noted that the UPDF is now a professional institution that attracts citizens of various academic qualifications and professions. He was delighted by the quality of education of the new soldiers.
“Among the new soldiers are a number of master’s degree holders, Degree, Diploma, Certificate and other professional certificate holders.
“When we have an educated army, teaching is easy; they can easily learn,” said Gen Museveni.
In his speech, the Chief of Defence Forces (CDF), General David Muhoozi told the newly passed-out soldiers to remain loyal, patient and enthusiastically vigilant to defend the country.

The CDF thanked the President for his continued guidance and giving direction towards refining the professionalization and capacity building in the UPDF.
He noted that over the years, the UPDF has built capacity to respond to both military and non-military threats. “Asides from ensuring the country’s security, the UPDF has been central in disaster control such as floods, locusts and COVID-19. As we continue developing capacity through training and equipping, we will be able to do more,” said Gen Muhoozi.