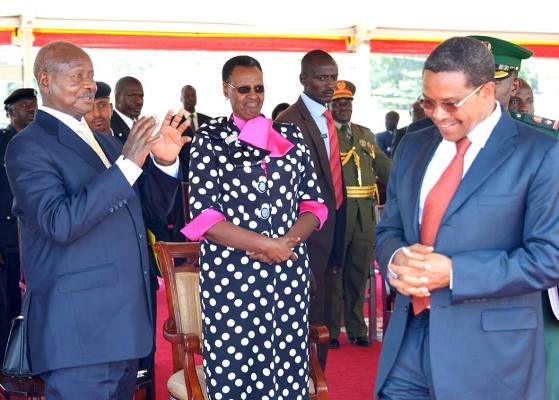 
The function was held at Ibanda Demonstration playground Ibanda district.
In his remarks, the President reminded Ugandans what the NRA/NRM has done over years such as building roads, improving Education Sector, constructing roads, improving the Health Sector, building factories and creating employment for many Ugandans.

He said Africa is the origin of man and it has made a huge contribution towards human history.
The President informed the gathering that the invention of a printing press by a German man Guternberg was the beginning of Africa’s problems because Africans missed the historical mass shifting from human muscle to machines.


“As the NRM Government, we have been telling people that we need to make a number of jumps from subsistence Agriculture to income generating through agriculture” he said.
The whole Country must not only depend on Agriculture but also on the service sector and the ICT sector which is the new sector.


He said Uganda now has two million employed in nonagricultural activities and this is a good step towards the socio economic transformation of the nation.
We also have market for our goods now of almost all our goods and this shall improve by working with our brothers in the East African Integration Market.


The former president of Tanzania His Excellence Dr.Jakaya Kikwete thanked the President for inviting him to celebrate with him the 34th National Resistance Movement (NRM) anniversary victory that transformed Uganda tremendously.


He said that he first met President Museveni at the University of Dar es Salaam and after hearing good stories about him and how he was militant in nature.
He also said that he has been a mentor not only to him but many African leaders and that he has a passion to contribute to African Revolution.