Home Politics Museveni is a father & a wise man of Africa – Sudan’s... 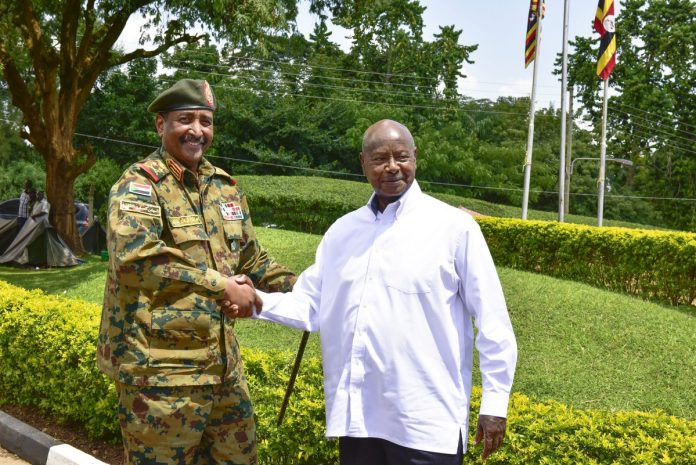 President Yoweri Museveni on Friday met the leader of Sudan’s Transitional Military Council that is under pressure to hand over power to civilians.
The President expressed his gratitude to learn that the situation in Sudan is now normalising following the agreement reached between the Military Council and other groups in Khartoum.


“I had a good briefing from His Excellency. I am very happy now the Military Council has agreed with the groups. I encourage the Sudanese to agree because this type of agitation is very dangerous. It scares away business and it scares away investors,” he said.
The President made the remarks after meeting the Chairman of the Transitional Military Council, H.E. Abdel fattah Al-Burhan , who called on him at the State Lodge in Mbale Municipality, Eastern Uganda.

The Chairperson of the Sudanese Military Council was accompanied by a delegation of members of the Council together with the Minister of Foreign Affairs Mr. Sam Kuteesa.
President Museveni pointed out that Uganda had a long experience in a similar situation and later realised that a lot of development time had already been lost.
“By the time we were trying to get out, we had lost a lot of development time. The earlier we agree to move in a democratic way the better,” he said.


The visiting Chairperson of the Military Council, H.E. Abdel Fattah on his part, said they were very happy to be in Uganda to meet President Museveni. He added that the visit had come at a critical time when there is now an agreement between the Military Council and other groups in the Sudan.


He described President Museveni as a father and a wise man of Africa who has a lot of experience, which can be given to the neighbouring countries and Africa as a whole.
“We wish that the visit will have a very positive reflection on the way forward for Sudan internally, regionally and externally,” he said.


read: Museveni’s intellect is beyond human; perhaps next to God’s; the man is God sent- Ruth Nankabirwa

He assured his host that Sudan is going to be accommodative to everybody and will restore its former glory.