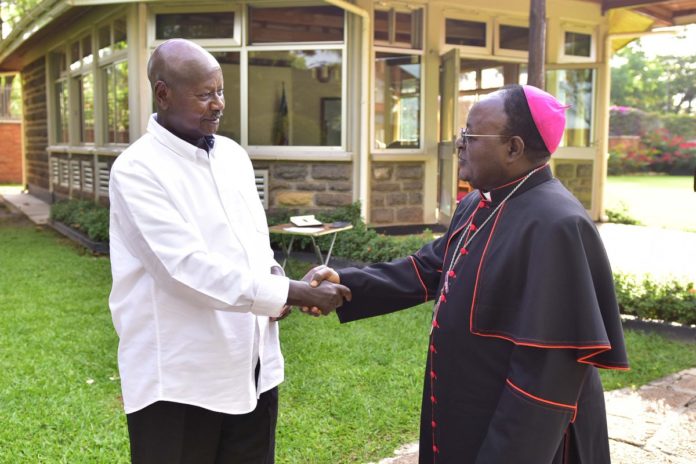 President Museveni on Sunday evening held a private meeting with the Archbishop of Kampala Archdiocese, Cyprian Kizito Lwanga. The two leaders discussed a number of issues.
‘ ‘Held private fruitful deliberations with His Grace, the Archbishop of Kampala Archdiocese, the Most Reverend Cyprian Kizito Lwanga, at State House Nakasero’’ the president tweeted on Monday


Archbishop, Lwanga in Easter sermon told congregation that government had planted priests to spy on him and other religious leaders.
“I was told that Government has recruited spies within the church and they have been given a lot of money- I was told that the spies have reported back that I want to overthrow Government,” he said.
He added: But I have one message for you Mr President, those people [ security agencies] are your enemies …You people in ISO, CMI, Police, stop telling the president lies, Mr President your mind is being poisoned and you are acting on that.

Archbishop Lwanga also revealed that , unknown people threw letter inside his fence at night.
“So, the following day when the guards came and gave it to me, I opened it and found a list of all those who have been recruited to work for ISO, ESO, CMI and others organs and these included Catholic priests, Anglican priests and Sheikhs,” he added.


He added that while preparing for Easter Sunday mass, his security detail noticed a blank tinted car without number plates parked near his gate, which sped off as his security detail approached it.
“They thought I was going to walk through my gate to go to the cathedral but it didn’t happen, so when the security went near to access who it was, he turned round and rushed only to realize there were no number plates. So what had he come to do? Probably to crush the Archbishop,” Archbishop Lwanga said.


Following the sermon, On Easter Monday, President Museveni spoke with the Archbishop over the phone and they later agreed to meet on a way forward on ironing out the standing matters. Investigations are already underway by the relevant authorities.