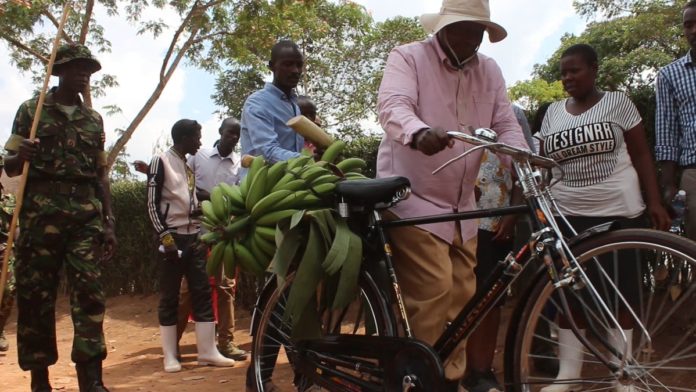 On Wednesday, president Museveni started harvesting from his water bottle drip-irrigated Kawumu demonstration farm in Makulubita sub- County, Luweero district
He said those who were laughing at his methods did not know what they were doing adding that by the time they realize it is worth, the world will have moved ahead.


“They were laughing and asking on social media how Museveni can use bottles in the modern world to irrigate crops,” he said.
“Let those who were laughing at me eat their words. They should come and witness my harvest. Many of you say the climate does not favour you because of the sun but you forget that with irrigation one can still be able to get good yields,” the president said as he harvested Matooke, Pineapples, and tomatoes.
In October 2016, the president started a demonstration farm in Kawumu to put in practice what he has been talking about as the four-acre model.

‘ ‘At that time, we were experiencing an extended drought and I talked to people about adapting some rudimentary methods like drip irrigation using plastic water bottles to keep the crops alive. Some people heeded my advice, and I am sure they benefited, while others laughed at my efforts.’’
‘ ‘Today, 16 months later and with consistent bottle irrigation, the farm is yielding results. We are now harvesting tomatoes, passion fruits, mushrooms, pineapples and matooke alongside fish, chicken and dairy products.’’


The coffee too is flowering at 12 months instead of the usual 18 months because they survived the first stages on drip irrigation.
The president explained that there is no question about our ability to improve our household income when we employ basic measures such as this.


‘ ‘I am glad that the neighbouring homesteads I visited organised under the Kawumu Village Sacco all seem to be catching up and this should be emulated countrywide.’’ Adding that he was happy to meet people that have started to move from urban centres back to the villages to engage in gainful agriculture.