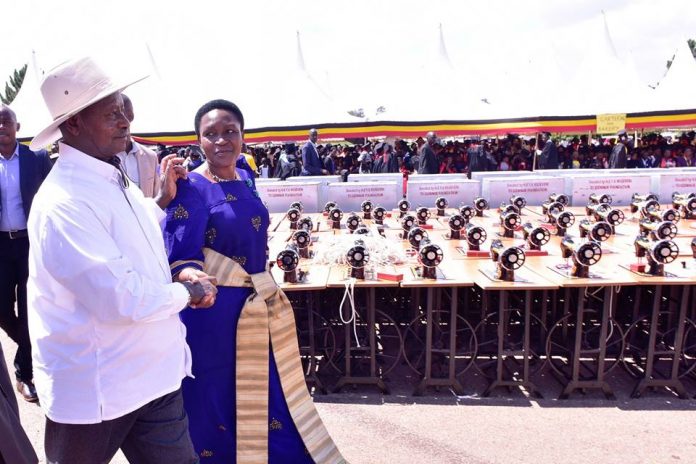 President Museveni on Saturday officiated at the passing-out of a group of graduates from the Seninde Foundation. Hon. Seninde is also the Wakiso district woman MP and state minister for Primary education.


The minister, under Sseninde Foundation is training women in areas such as catering and hotel hospitality, tailoring, bakery and making paper bags, piggery, making charcoal from garbage and hair dressing.

The course is for three and a half months
‘’The stories I have heard from some of the beneficiaries of this training is testament that this method is progressing in the right direction, creating an empowered population. I thank Hon Rose Seninde, her foundation and its partners for this initiative. ‘’ the president said.


He added: Going forward, I hope to see emphasis being put to value addition efforts. As government, we shall look into equipping groups with machinery required for such processes at parish level.
‘’In terms of capital (entandikwa), we have been granting this aid to groups in form of grants because the commercial banks were letting our people down with prohibitive interest rates.’’


The president also tasked Opportunity Bank, to handle the revolving fund of Shs500 million for the Seninde foundation.
‘ ‘ I have asked that the bank manages this fund at 1% interest rate per month.’’
The President implored Ugandans and Africans in general to embrace commercial agriculture and value addition to their products, such as shoe making, milk processing, furniture and sewing sweaters, among others, saying that will stop the habit of donating value to foreign markets.
“Africa is rich. If you want to know it, look at yourselves. Look at the shirt you are putting on and look at your shoes. If we start producing them here, we will save a lot of money that we donate to foreign markets,” he said.