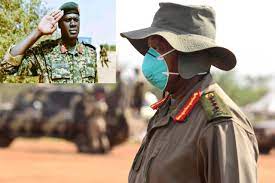 Tribute to Lokech
Major-General Lokech joined the Army in 1987. On checking the records, I have found that, as a student at Comboni Secondary School, he had started supporting the Army in its operations by providing information about the Lakwena – LRA rebels and terrorists. He trained at Kaweweta in the 1980s as an ordinary soldier, having started working with the Army as a volunteer in 1987. He was then, commissioned as 2nd Lt.
I, personally, as Commander-in-Chief, either heard of or worked closely with Lokech three times, where he did meritorious service. On one occasion, I was in Gulu with the anti-LRA operations. I was informed that there was a Commander that routinely fought through LRA ambushes in the area between Atanga and Acholibur.

Second time, I heard of Lokech was when he was Contingent Commander in Somalia. The UPDF, under his command, made a historic contribution to peace in Africa when they defeated Al-Shabaab in Mogadishu. Remember that we had gone to Mogadishu not to fight but simply do peace-keeping by guarding the Sea-Port, Air-port and State House.
It is the bankruptcy of Al-Shabaab that forced us to go on the offensive and flush out the terrorists out of the areas of: Wanaha Road, Red Mosque, Bakara market, Mogadishu stadium, Mogadishu University, etc.
Lokech and his colleagues were ready for the job. That is how Lokech, apparently, got the praise name (ekikubyo) of the ─ “Lion of Mogadishu”. I was not aware of that until after his death. However, what I was aware of was that Lokech was one of the good Commanders that had performed well in the battles against Al-Shabaab in Somalia. Indeed, the President of Somalia, H.E. Mohamed Abdullahi Farmaajo rang me on the 22nd of August, 2021, to express the condolences of the Somali people to his family and to the Ugandans.
The third time, was, recently, when I appointed him as Deputy Inspector General of Police. Since the criminals, encouraged by bankrupt elements, had launched a terrorist campaign against innocent Ugandans, the bankrupt cowards, fearing to fight the Army, they were now targeting soft-targets: women, Moslem Sheikhs, lawyers, like Kagezi (prosecutor), etc.


Having studied the situation, I decided on 12 measures of fighting crime which I announced in my Speech to Parliament on the 20th of June, 2018. One of those measures was the installation of the cameras. These cameras, make the work of fighting insecurity very easy. However, that is on condition that there are serious commanders and operators that are available for 24 hours a day, seven days a week, to use the cameras. Until Lokech went to the Police, that was, apparently, not the case. Camera monitoring personnel would be playing cards (matatu), on social-media, etc.
That is how crime would not be easily detected in spite of the presence of the cameras and other investigative means. The short time Lokech was in the Police, that all changed. Whenever there are security threats, I always get involved directly. With Lokech, it was so easy because I found an eager student in this policing job, that was new to him. What is crucial is the attitude of care for the people and the country.
That is how, in the case of Gen. Katumba, we succeeded. Although the criminals used their shallow tactics of covering their heads, on account of Lokech’s concentration, together with some of his colleagues like Ddamulira, some of the criminals were clearly identified and they went for them. Arresting some, led to the identification of the others. This was a shock to the ADF because they had got used to the uncaring actors that would not dig deep even when the clues were abundant. That is why, apparently, the ADF were now targeting Lokech as a person. Why was he a serious patriot and an effective actor? They prefer non-effective actors.


The ADF had, apparently, sent a suicide bomber there in Pader to kill mourners. Fortunately, the main actor was arrested with his materials for making IEDs (Improvised Explosive Devices). The Plans and Orders for killing our people are coming from the terrorists in Eastern Congo.
We are continuing to discuss with H.E. Tshisekedi about eliminating that cancer. I will also discuss with the representatives of the 5 Permanent Members of the Security Council because I hear that they are the ones that control MONUSCO in Eastern Congo. It is not correct for MONUSCO to co-exist with the terrorists in Eastern Congo that continue to massacre Congolese and, then, disturb us the neighbours. The terrorists that, eventually, attacked our brothers in Mozambique, were, for long period, preparing themselves in Eastern Congo. Our forces are ready to contribute to the punishment of these parasites. We just need the concurrence of Congo Government.
When I checked the records, I found that Lokech was, apparently, involved in the extraction of our forces from Bafwasende in Congo, a distance of 700 kms through bad roads of that area in the Congo Forest.
I have not heard that Lokech was involved in selling Army fuel which, sometimes, is a mistake that ruins the contribution of brave commanders. You cannot say that you are a brave Commander but you sell Army fuel. How will the Army fight in modern war without fuel? It is bravery in nullity. You cannot be brave and corrupt because corruption will lead to our defeat by lacking what to use because it has been sold by our “brave” commander.


Given his exemplary contribution for the last 30years and given the fact that he had done all the Leadership Courses up to NDC (National Defence College- South Africa) in 2010 and given that I have never heard reports of corruption about him, I hereby, using the authority given to the President by Articles 98 and 99 of the 1995 Constitution of Uganda, promote Major General Paul Lokech, Posthumously, to the rank of Lieutenant – General. I have heard some civilians getting out of their Lubimbi (Katara- area of responsibility) proposing that he be promoted to full General. I would like to educate our citizens that Army is like the church which the civilians know more about. You cannot appoint a Reverend a Bishop unless there is a Diocese that needs a Bishop, even if the Reverend is very good.
The ranks go with the levels of training, which Lokech had achieved; performance, where Lokech has excelled; and also size of responsibility. Having been, lately, Deputy Inspector General of Police, the rank of Lieutenant -General is the appropriate one.


Some of the criminals that have been cutting people in the area of Masaka have been arrested with exhibits and some of those who have been sending them have been identified. All the killers will be held accountable. “Whatever a man sows, that is what he reaps” Galatians 6:7.
Lokech’s death was untimely and totally accidental. Having fallen from a chair and fracturing the smaller bone known as Fibula, he developed clots that killed him. I was almost blaming the doctors by wondering why they did not predict this because, apparently, clots are common with fractures. The Doctors I asked, however, pointed out that Lokech had sustained both a fracture and also an open wound. The anti-coagulation (anti-clotting) medicines make the blood light and, with wounds, it can lead to excessive bleeding. The doctors need to sensitize all of us. What should be done if you have both a fracture and a wound?


Lokech did his part in an exemplary way. May His Soul Rest in Eternal Peace. We shall give all necessary support to his family.