Home Business Museveni: After liberating Uganda politically, my focus is on economic liberation 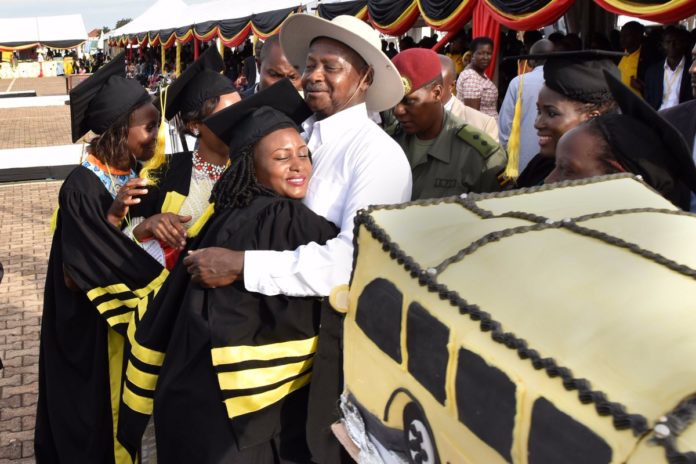 President Museveni has said that after liberating the country politically, the focus now is liberating Uganda economically.
The president revealed that Ugandans spend $7 billion annually on imports yet we are able to produce most of them here especially domestic consumables, adding that it is high time we engaged in import substitution and earn from our own people.


The President noted that continued exportation of raw materials while importing finished products, makes the country lose millions of jobs that the youth dearly need thus escalating the country’s unemployment challenge.
“We can’t continue donating jobs to the developed countries because we need them more than those countries and we are ready to give you all the machinery you need and the start-up capital so that you are able to start your own business and employ your selves,” he added.
The president made remarks while on Monday while passing out 661 female pioneers of the Presidential Initiative on the Skilling of the Girl Programme that is tailored to fight against poverty and unemployment among the girl child group in the country.

The ceremony for the young female learners from the 5 Divisions of Kampala took place at Kololo independence ceremonial grounds in Kampala. The learners spent 6 months training in a number of skills such as tailoring, bakery, weaving, knitting, embroidery and shoe making as well as other leather related products.
President Museveni gave all the 661 graduands working machines related to the skills they acquired, urged them to take advantage of the readily available Ugandan market that largely depends on imports and produce quality goods to sell within the country and rid themselves of poverty.
He said that after the Movement had liberated the country politically, new focus and efforts are now being channelled to the economic liberation of the country. He stressed that in the economic liberation struggle focus will be on fighting poverty and unemployment that pose a great challenge to the country especially among the youth.


READ: Museveni listens to me, accepts my recommendations on national issues- Andrew Mwenda

“Ugandans are rich and you don’t have to look anywhere for the start because we import all the things we use in our lives and you need to produce and substitute all those things we import from Asia and other continents,” the President said.

Mr. Museveni used the occasion to warn government officials against wasting government resources amidst the challenges of poverty and unemployment. He revealed that the funding of the six-month programme and the equipping of all the 661 graduands, cost his office Shs.1.2 billion. He said that this makes it about Shs.2 million per person adding that if government prioritised the programme and made sure there is no resource wasting, the whole country can be covered.