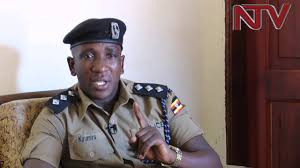 Former Buyende District Police Commander Muhammad Kirumira was on Saturday evening reportedly shot dead in Nakuwande, along Mityana Road.The attackers were reportedly riding on a boda boda.
Photos shared on social media showed the outspoken officer and former Buyende District Police Commander was killed on the spot while wife was rushed to hospital in critical condition.


hours before he was gunned down, Kirumira had written ‘The almighty is above all of us. I wish every body well’ on his Facebook page accompanied by a photo of him alongside two men at an unexplained function.

Kirumira is said to have been killed in his car Reg Number UAJ 228V, near his home in Bulenga.the controversial police officer, On Facebook, he accused senior officers in the force of corruption, working with criminal gangs and hiring out guns to wrong elements. He repeatedly said that he was the target of an assassination plot.


Muhammed Kirumira’s shooting makes the second this year of a public figure after Ibrahim Abiriga. In terms of high Profile Police personnel, he is the second in two years after Andrew Felix Kaweesi.
In March 2017, Felix Kaweesi, the deputy head of police was shot dead as he drove from his home. His killers have not been found. His killing prompted changes in the force’s hierarchy after president Museveni vowed to ‘rid the police of weevils’.


In June, Arua MP, Ibrahim Abiriga was shot dead with his body guard near his home on the outskirts of Kampala. No one has been charged for his murder.

ASP Muhammed Kirumira called me this week and we talked for more than an hour.
I didn't know it was my last conversation with you.
Criminals have gunned him down.
RIP Kirumira!

None of the @PoliceUg spokespersons is reachable at the moment as residents of Bulenga confirm the shooting of former Buyende DPC Mohammad Kirumira this evening. #NTVNews pic.twitter.com/ZWcGnQcVc3

Update:
In a brief statement Uganda Police said on Sunday morning that the woman killed with Afande Kimumira is not his wife ‘ ‘We have since established that the lady assassinated along with our officer, ASP Muhammad Kirumira is not his wife. The wife wasn’t with him at the time.’’

CORRECTION:We have since established that the lady assassinated along with our officer, ASP Muhammad Kirumira is not his wife. The wife wasn't with him at the time. We've identified the lady & interacted with her family. We shall withhold releasing her name in the meantime https://t.co/1lxMqBAEUb