Home Regional Mugabe gets wheelchair as a birthday gift 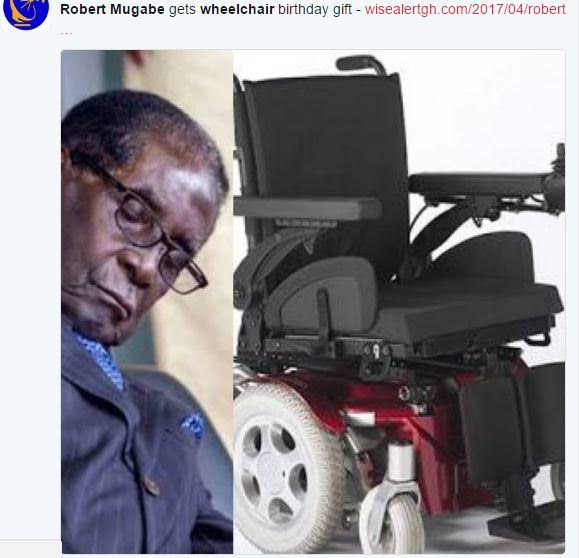 Zimbabwean Cabinet ministers on Monday presented a mobile chair to President Robert Mugabe to “enable him navigate his way around his office as well as at home”.
The mobile chair, otherwise ordinarily referred to as a wheelchair, was presented as a belated birthday gift during a ceremony at his office. Critics said it confirmed that old age had taken its toll on the Zanu-PF leader who turned 93 in February.


Mugabe thanked the ministers for coming up with the idea of the gift, saying this was an indication of a good working spirit in his Zanu-PF government.
“I thank all of you for putting your heads together to come up with this gift,” he said as he took delivery of the special mobile chair which insiders claimed was bought in China.
READ: We will field Robert Mugabe’s corpse for election’- First Lady

“The gift shows the team spirit which should always prevail all times in the delivery of service to the nation.”
But there was derision on social media and in the opposition as critics said the development confirmed Mugabe was “incapacitated”, citing advanced age and alleged ill-health.
reaction on social media
There was a general consensus he should quit active politics after being at the helm of the country for the past 38 years.


Zanu-PF has endorsed him to be the party’s presidential candidate at next year’s polls tentatively set for July.
Constitutional lawyer and former adviser to MDC leader Morgan Tsvangirai, Alex Magaisa said: So President Mugabe’s cabinet gave him a special mobile chair. Does he get the message?”
Reward Mushayabasa, a political analyst said this showed that Mugabe had long lost his marbles. “He does not care about the welfare of Zimbabweans and the legacy he will bequeath to our nation. He is more interested in self-preservation,” said Mushayabasa.
Source: new24