Home Politics Mnangagwa declared winner with 50.8% of the vote ahead of rival on... 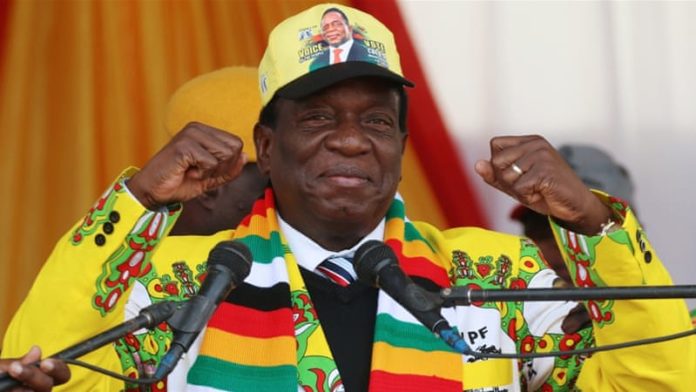 President Emmerson Mnangagwa has won Zimbabwe’s presidential election, according to the country’s electoral commission.
With all 10 provinces declared, Mnangagwa won 50.8% of votes to 44.3% for opposition leader Nelson Chamisa.
The chairman of Mr Chamisa’s MDC Alliance said the count could not be verified.


The president said he was “humbled” on Twitter, and called the result “a new beginning”.
Chamisa has insisted he has won the presidential poll, telling reporters earlier on Thursday the ruling Zanu-PF party was “trying to bastardise the result”, something that “we will not allow”.-the BBC reported.
But the Zimbabwe Electoral Commission said there was “absolutely no skulduggery”.
The elections were the first since long-time ruler Robert Mugabe, 94, was ousted in November last year.

Mnangagwa said the government was in talks with Chamisa to defuse the crisis and proposed an independent investigation to bring those who were behind the violence to justice.
“This land is home to all of us, and we will sink or swim together,” Mr Mnangagwa said in a series of tweets.
Fake results

I am humbled to be elected President of the Second Republic of Zimbabwe.

Though we may have been divided at the polls, we are united in our dreams.

This is a new beginning. Let us join hands, in peace, unity & love, & together build a new Zimbabwe for all! pic.twitter.com/FbdrixAktR

Zimbabwe’s opposition MDC party on Friday said it rejected official election and vowed to challenge the outcome in court.
“They are fake, they are not authentic, we reject them,” MDC spokesman Morgan Komichi told AFP. “We will take this to the courts.”


Moments before the official announcement, Komichi denounced the vote count as “fake” as he took to the stage at the ZEC results centre before being removed by police.

THANK YOU ZIMBABWE …I’m humbled by the support you have given to me as a Presidential Candidate. We have won the popular vote. You voted for total Change in this past election!We have won this one together. No amount of results manipulation will alter your WILL #Godisinit

“What they have been trying to do of late is to play around,” Chamisa told reporters hours before the final results. “That is rigging, that is manipulation, trying to bastardise the result, and that we will not allow.”
Mnangagwa had promised a free and fair vote after the military ushered him to power when Mugabe was forced to resign in November.