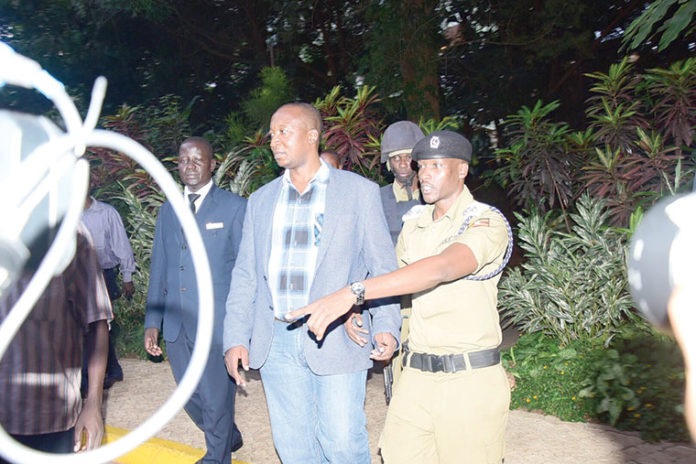 Herbert Kabafunzaki, the State Minister for Labour, Employment and Industrial Relations, appeared before Anti-corruption court chief magistrate Agnes Alum on Tuesday afternoon with his Political assistant with whom he was arrested on Saturday evening at Serena Hotel seeking a bribe.
Prosecution says on 8th day of April 2017 at Serena Hotel in Kampala, while in performance of his duties as a minister for labour, employment and industrial relations, directly solicited for himself Ugx. 15m, as a gratification from Mohammed Hamid in exchange for clearing the name of Hamid from allegations of sexual harassment by his former employee.


Brian Mugabo, the personal assistant to Hon. Herbert Kabafunzaki pleaded guilty of accepting a five million bribe on behalf of the minister. He also said everything stated by prosecution is true. Mr. Mugabo also shocked many in court when he disowned the minister’s lawyer in court saying he doesn’t need legal services
The Minister Kabafunzaki denied the charge and referred to hotel’s CCTV camera footage for exoneration. However, his recorded telephone conversation in which he requested to meet the Aya proprietor to “stop the police investigation” and “clear your name.” recording pinned him.

After being charged with three counts that include Corruption and Conspiracy to commit a felony, the minister through his Counsel Kenneth Muhangi applied for bail. He presented three sureties that included his wife.
The accused lawyer stated that the accused is a law-abiding citizen and a father of four all below the age of 18. Counsel Muhangi told court that the minister is a law-abiding citizen and has a permanent place of residence.


However, the State prosecutor opposed the bail application saying that Minister was caught ‘red-handed with a bribe and his bail might interfere with evidence and the case. Otherwise the State prosecutor asked court for stringent bail terms including hefty amounts of money, passport and a land title. The Prosecution also asked court to ensure that the minister reports to court weekly if granted bail
Speaking after the court session, Minister Herbert Kabafunzaki told journalists: This is a set up. I didn’t call that man from AYA to meet up. I was at Serena Hotel having lunch with my daughter. Adding that: The good thing President Museveni knows that I’m innocent. I’m a man of God