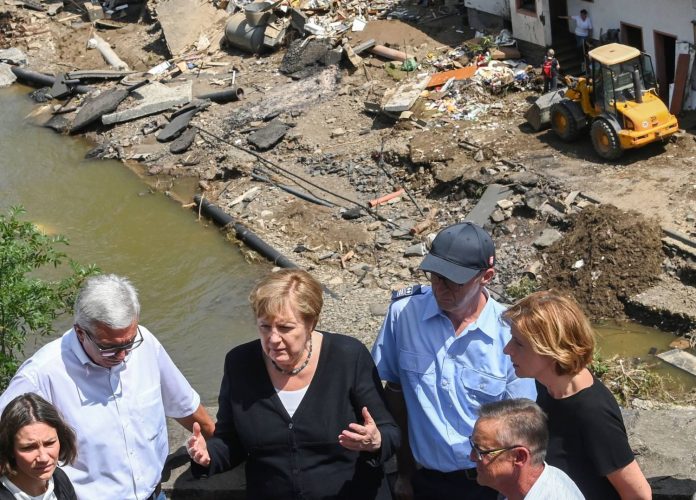 German Chancellor Angela Merkel said Sunday the recent flooding in Europe is “terrifying” and promised swift financial assistance for one of the hardest hit regions in her country.
“The German language can barely describe the devastation that’s taken place,” she said as the death toll reached 184 across Europe, including 157 in Germany.
As rescue workers continued their search for missing people, a district in Bavaria in southern Germany was hit by flash flooding that killed at least one person. Roads turned into rivers, with vehicles swept away by the rapid currents and wide swaths of land buried in mud near the border with Austria.


“We were not prepared for this,” said Berchtesgadener Land district administrator Bernhard Kern. He said the situation deteriorated “drastically” late Saturday, leaving little time for emergency services to act.
In the worst-hit Ahrweiler district south of Cologne, about 110 people have been killed, with more bodies expected to be found there as flood waters recede, police say.
The floods began Wednesday and have mainly hit the states of Rhineland Palatinate, North Rhine-Westphalia and parts of Belgium, where the death toll stands at 27. Entire communities have been left without power or communications.
Merkel said governments have to become better and faster in their efforts to tackle the impact of climate change. Several days ago, Europe outlined a package of steps toward “net zero” emissions by the middle of the century.

The German government said it is offering $354 million in immediate relief and billions of euros to fix collapsed houses, streets and bridges, Finance Minister Olaf Scholz told weekly newspaper Bild am Sonntag.
“There is huge damage and that much is clear: those who lost their businesses, their houses, cannot stem the losses alone,” he said.


Belgium is planning a national day of mourning on Tuesday. Water levels were falling there on Sunday and the clean-up operation was under way. But military troops were sent into the eastern town of Pepinster, where a dozen buildings collapsed, to search for more victims.
Belgian authorities said the supply of clean drinking water was also a big concern.
VOA