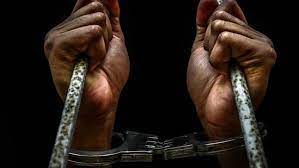 Police in Kabale district arrested a 19 years old man for strangling his 35 year old biological brother to death over a Ugx. 5,00 debt.

The deceased, Rumanzi Blair, a resident of Hamumba cell, Bugarama parish in Kaharo sub county Kabale district was allegedly murdered by his younger brother Atukwase Tyson of the same address.

It’s alleged that on Monday at around midnight, the two who both stay in their father’s house developed a quarrel, when the deceased came demanding his Ugx. 5, 000 from the suspect, with intention to cut him.


Instead, the suspect overpowered him, took the panga and strangled him dead by the neck.

Elly Maate,the Kigezi regional police spokesperson says the suspect was arrested from his hide out in Bukinda.

September, 2020, Minister Matia Kasaija warned that while some regions have progressed well, the economic inequality must be addressed, as abject poverty levels are dominating populations in other regions, with people unable to afford basic services.